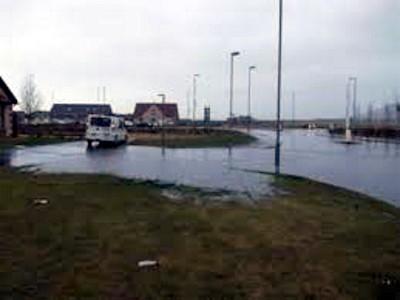 A FLOODING TROUBLE spot in Moray was hit again after three days of rainfall caused a burn to burst its banks and water pour down the A942 approach into Buckie yesterday.

Fire and Rescue Service crews were particularly concerned about the Parklands Nursing Home amid fears that an evacuation might be required, while the local Tesco store closed their fuel station as customers were unable to use the flooded car park.

Meanwhile homes also came under threat at nearby Fairview Road as water was rising and entering their homes – the second time this has happened in the last few years.

The duty manager at Tesco, Paul Tytler, said the flooding “happened very quickly” on Friday afternoon: “We saw the water coming down the road slowly – then all of a sudden it was coming up over the bank. It was up to your shin at one point in the garage.”

Water started covering the area in just 30 minutes between 3.30pm and 4pm, with mechanical diggers sent in to create trenches to divert water from the Burn of Buckie away from the town.

Meanwhile at the Parklands Nursing Home area manager Shona Conlin said that they their contingency plans had swung into action when the rising water levels were noted, sandbags put in place and extra staff and volunteers called in to help.

A spokesman for Scottish Fire and Rescue said: “The original call was from Parklands Nursing Home because the water was beginning to get a bit high. We managed to clear it to stop the water going into the building.”

Police also confirmed that the A98 was closed yesterday afternoon due to the high water level.

The area affected by the flooding was the same that suffered in August 2014 when a local farmer came to the rescue of Parklands, using his tractor and specialist pumping equipment to lower the water level and avoid the home having to be evacuated.

A report was issued to local Councillors following previous flood events at the Tesco site, highlighting issues that were noted when the store was first built and which had not been fully addressed by the landowners.

As far back as December 2012 the landowners were warned that the SUDS drainage system put in place at the time the store was built was “not coping with the levels of surface water and there is also an indication of problems with the foul sewer in the area (possibly from surface water entering that system”.

In a response to a Freedom of Information request last year, Moray Council made it clear that they were not responsible for drainage at the Tesco store nor in the Fairview Road access route. An agreement existed that would see the Council adopt the access road – but they would not do so until it was brought up to standard, which is not yet the case.

Forecasters say that the rain of the last few days will now dissipate with the forecast in the area cloudy this morning but making way to clear skies by the early evening. Sunday should see temperatures rising – with the chance of some brief showers later in the day.