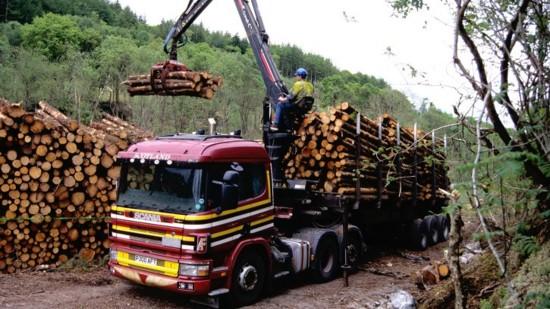 THERE WAS SOME good news for the hard-pressed Moray Council finances this week with the news that the local authority has been awarded £122,000 for the upkeep or roads used in transporting timber.

The award has been provided by the Scottish Timber Transport Scheme and is granted on the condition that Moray Council match-fund the amount and use if on roads regularly in use for timber extraction.

As one of Scotland’s most heavily forested regions, the timber industry is important to the local economy – making well-maintained road for harvesting machinery and haulage vehicles vital.

Moray’s bid for funding had been backed by the Grampian Timber Transport Group, of which Moray Council, Aberdeenshire Council, the Forestry Commission and local timber producers and estate owners are members.

The funding will be used on approved timber transport routes – in this instance for edge strengthening on the C13E Dallas to Knockando road and C23E near Roseisle. Work will also be carried out on the U105E Garrowslack road near Mosstowie.

Councillor Chris Tuke, chair of the planning and regulatory services committee, welcomed the funding, saying: “The timber industry is hugely important to the Moray economy and this funding, along with the funding already earmarked by the council, will help to facilitate harvesting and extracting operations.

“This contribution is most welcome and will help to alleviate the wear and tear on narrow rural roads.

The funding was also welcomed by the SNP Opposition Spokesperson for Economic Development & Infrastructure in The Moray Council, Councillor Graham Leadbitter, who said: “Timber production is a significant part of Moray’s economy and a major employer in our region. As with any industry it puts pressure on particular parts of our infrastructure, notably some of our rural roads.

“It is important that these roads are invested in and well maintained, which is why the SNP Scottish Government has put in significant additional funding through the Timber Transport Scheme, recognising the importance of the industry to the economy.

“This significant grant from the scheme will enable Moray Council to get more road improvements done than would otherwise be the case.”