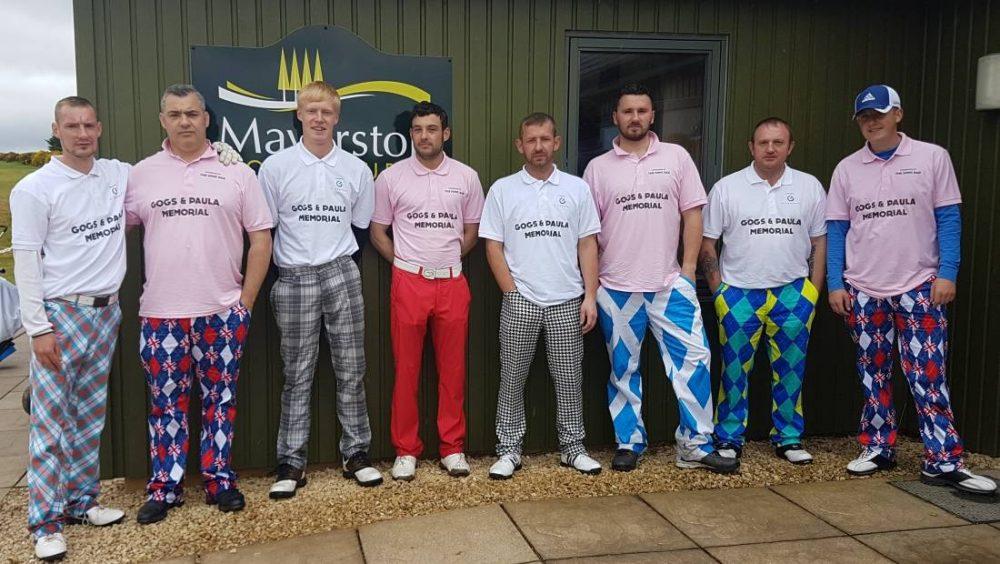 TWO TEAMS OF four Moray golfers were on the tee at 6am on Sunday with a firm eye on raising as much as possible for Macmillan Cancer Support.

The eight friends took on the Maverston course near Urquhart in their own tribute to those involved in at Macmillan and the support they had given their own close family and friends.

Last week Danny explained to insideMoray that it was family tragedy that prompted his suggesting the idea – and he was immediately joined in the effort by seven family members and friends.

“My uncle Gogs had died three years ago while Paula McIntyre, the wife of my friend Peter, has also passed away from cancer – so we decided to split into two teams of four, team Techt and team Murdy, for our challenge in memory of Gogs and Paula,” Danny explained ahead of the event.

He added: “All the time we were campaigning for the event, I was pleading with people to donate saying that we just never know who cancer will affect next. Then just two weeks ago my team-mate Willie told me that his mother had just been diagnosed with cancer.”

Danny was struck by further tragedy just before the event, with his father passing away after also suddenly being struck down by cancer.

As the friends completed their challenge on Sunday, Danny said it had been a wet start to their day – but they were determined to power on regardless: “The first round was tough in these conditions but we kept going – then our families and friends started to arrive, helping us as caddies and generally pushing us on,” he said.

Danny continued: “One of the caddies who had joined us is a young man called Edward Russell, who is still in remission from leukaemia and suffering from a leg injury. He joined us of his own accord and stuck with us all the way round three of the four gruelling rounds – a complete and utter warrior in my opinion.

“We have raised over £2000 between the two teams with some more big raffle prizes are still up for grabs. These include a day golfing at Lossiemouth, a golf lesson, two Walkers of Aberlour hampers, various bottles of whisky, a signed Rangers top by Andy A#Halliday and an expensive shawl from Johnstons woollen mill.

“Each and every one of us would like to take the time to thank everyone who has got involved and helped us to make this happen – especially our wives, families and friends.”

Fundraising will continue through Danny’s Page or Graeme’s Page.