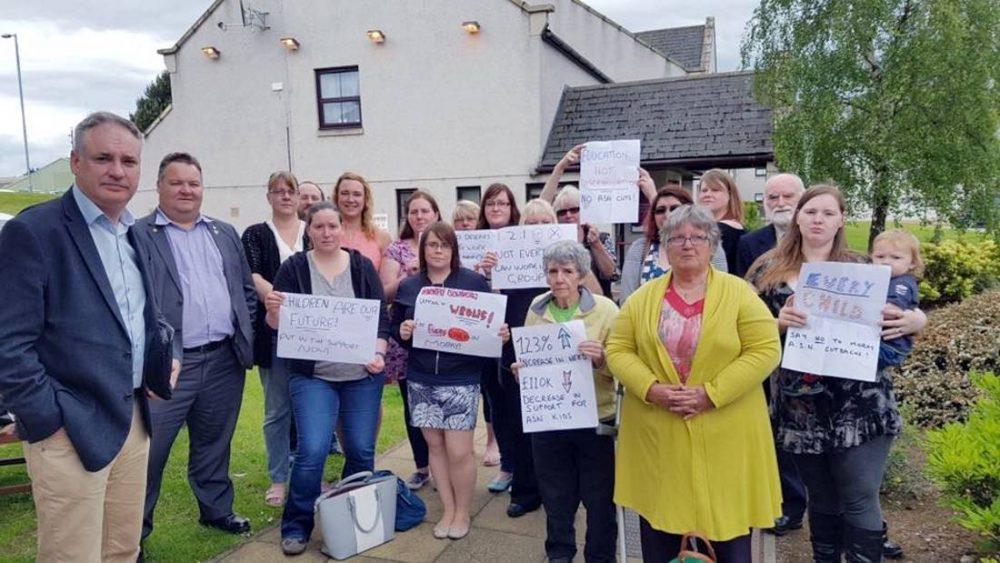 MORAY PARENTS PROTESTING over cuts being imposed on Additional Support Needs (ASN) staff at schools insist that the move will affect all children and not just those with special needs.

A fiery meeting of concerned parents in Elgin on Tuesday saw the group gain support from the charity Enable Scotland as well as local SNP Councillors and Richard Lochhead MSP.

Now parents will look on with renewed interest when the issue is discussed at the children and young people’s services committee in the Moray Council chamber this morning – a meeting that local MSP and Councillor, Douglas Ross, will attend having vowed to raise the “serious concerns” of parents.

Over 750 concerned parents have now joined the online protest group after it was revealed that several ASN posts would be lost in schools throughout Moray this summer. The protests were sparked when it was revealed that ASN teachers at Greenwards Primary had been told they did not have jobs to return to after the summer holiday.

At Tuesday’s meeting in Elgin, around 25 parents from throughout the region spoke of how the cuts would affect their children – prompting Mr Lochhead to promise his support by contacting the local authority. SNP Councillors Mike Shand and Graham Leadbitter also attended the meeting at the Brewers Fayre – with both insisting that they had never voted for cuts in ASN provision.

One of the campaign leaders, Gillian Groves, whose son Tom attends Greenwards, told the meeting that nobody should have the right to decide children would lose their support without having full knowledge of the impact it would have on them. She added: “This is putting children’s safety and education at risk and stretching hard working teachers.”

Moray Council, meanwhile, insist that their position will become clear when it is discussed in the Council Chamber today. However, parents insist that cuts at a time when the Council’s own figures show a growing need for ASN staff will be unacceptable no matter what reasons the local authority puts forward.

Following the meeting Mrs Groves announced that a plan of action was being formed with the support of their local MSP and Enable Scotland’s Elgin branch representative Anne Speake.

She said: “They have agreed to meet with us again to organise an action plan for our opposition to the proposed cuts. That will take place on Monday at 12.30 in the Laichmoray Hotel in Elgin.

“We are inviting all parents – regardless if their children need ASN or not – to come along and let their views be known.”