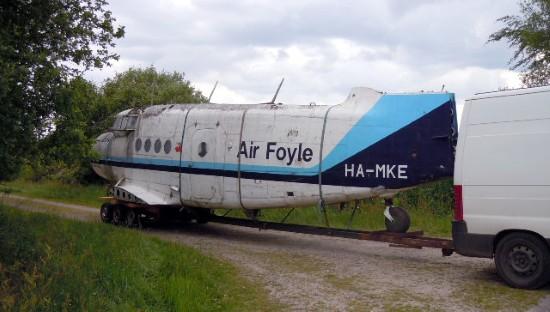 VISITORS TO MORAY’S Science, Technology and Aviation centre at Kinloss will soon have the chance to view a relic of the Soviet Union – and current star of the North Korean Air Force.

The latest addition to the fast growing Morayvia collection is to be an Antonov 2, an aircraft that first made an appearance in the Soviet Union in 1947, as that country was rebuilding following the ravages suffered in the second world war.

AN-2’s biplane structure already looked dated when they started rolling off the production line – but it proved to be an incredibly sound flying machine that proved popular around the world in a wide variety of uses.

The remarkably short space the AN-2 required to lift off and land along with its superb design by Oleg Antonov resulted in the aircraft continuing in service to this day. Only last year, the North Korean military proudly displayed their own fleet of AN-2’s painted in a fine new livery.

Over 19,000 AN-2’s had been built by the Soviets up to 1991 and employed in a variety of jobs from crop-dusting to utility transport – and even by their army to drop Paratroopers. Many thousands more AN-2’s were produced under licence by the Chinese – and even today, new AN-2’s are understood to roll off the production line in China.

The AN-2 that is arriving in Moray was in use by Air Foyle, the Bishop Strotford heavy air cargo company that ceased operations ten years ago.

Morayvia’s unpaid CEO, Stan Barbour, said: “We are delighted to confirm that the fuselage of our new exhibit is expected to arrive at the centre in Kinloss before the weekend – but we need to wait another week before the wings arrive.

“It will, however, be some time before we can put the AN-2 on public display as there will be quite a bit of work to be done on it by our team. It is very much a ‘work in progress’ – but this promises to have the potential as an educational tool as its systems are quite basic – as are its construction.

“It is certainly an unusual exhibit, as a Soviet design from the 1940’s that saw huge numbers being built. This will be the only aircraft of its type in Scotland as far as we know, so is quite a coup for Morayvia.”