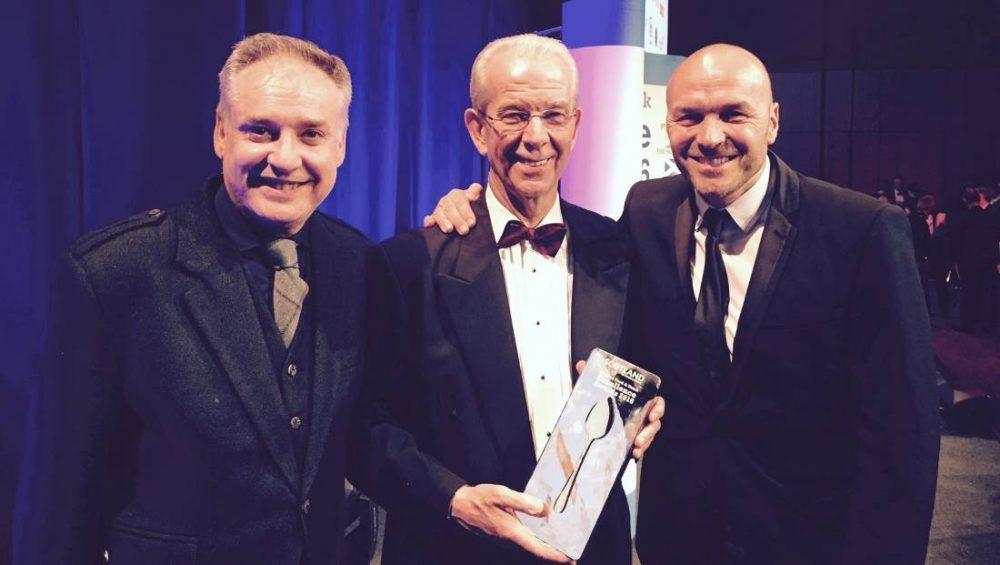 ONE OF MORAY’S most successful businessmen who guided Speyside firm Walker’s from a village bakery to a world-wide recognised brand has been recognised for his outstanding contribution to the food and drink industry.

Jim Walker was surprised at the Scotland Excellence awards this week when he received a special award from the new Cabinet Secretary for Rural Economy and Connectivity, Fergus Ewing.

Mr Ewing announced that Jim was the recipient of for his lifelong contribution to the industry, guiding the Speyside brand carrying his name to being marketed in more than 80 overseas markets.

Joining Mr Walker in celebrating his award was Moray MSP Richard Lochhead, who said: “I’m over the moon that Jim, who is not only a constituent but also a friend, received this award.

“Walker’s is an iconic Speyside business which is recognised world over and Jim has successfully grown that brand from a local village bakery to a company that now exports to more than 80 countries.

“Jim is well known and well-loved in Moray and I know that people are proud that he is ours, so I was delighted to have the chance to congratulate him in person at the awards and I have no doubt that Walkers Shortbread will continue to grow and expand.”

Also successful at the awards was Buckie-based firm Associated Seafoods, who received the Export Business of the Year award.

The firm has seen a steady growth in exports supplying its premium ‘The Pride of Scotland’ smoked salmon to 28 countries in five different continents, including Switzerland, the United Arab Emirates, the USA and Hong Kong.

Commercial Director Henry Angus said: “Much of this success can be attributed to the great care taken in producing our Scottish smoked salmon so as to ensure the best possible quality and taste.

“We only ever use specially selected Scottish salmon which is then smoked in our modern processing facility in Buckie by using traditional time-honoured techniques.”