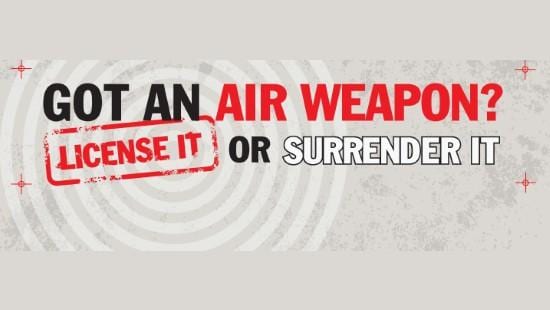 POLICE ARE REMINDING people in Moray who currently own air weapons that they must be registered by the end of this year – or surrendered.

A nationwide amnesty on such weapons has been in operation for several weeks with over 530 handed in at police stations around the north east.

However, the amnesty ends a week on Sunday – and by the time the new Air Weapons and Licensing (Scotland) Act 2015 comes into full effect at the end of this year it will be an offence to retain an air weapon without having the correct certificate.

Certificates can be applied for from July 1 with the new law coming into full force on December 31.

Chief Inspector Richard Craig, who is leading the air weapon campaign in the north east, said: “The surrender campaign has only been active for less than two weeks however it is very encouraging that so many air weapons have been handed in here in the north east already.

“Every one of these weapons has the potential to cause serious injury or death, in particular to children or young people if handled incorrectly. There will be many lying around in homes across the north east unused and this is a great opportunity to get rid of them.

“I would encourage anyone who has such a weapon to consider if they are likely to apply for a certificate under the new legislation and if not, hand it in to one of designated stations over the next week. It will remove the risk from their family and other members of the public.”

The Designated Police Offices within Moray which will have trained staff on duty to receive Air Weapons are:

The three-week surrender campaign started on Monday, May 23 and runs until Sunday, June 12.