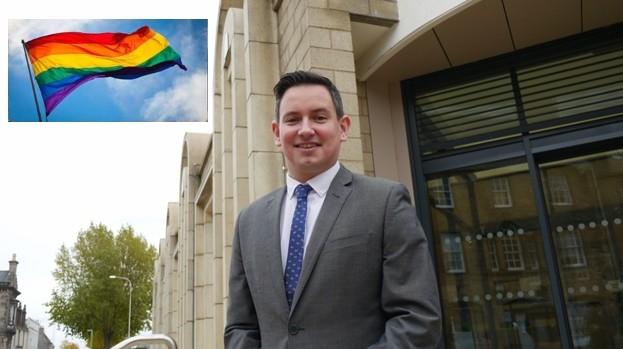 THE RAINBOW FLAG will today be raised over the Moray Council HQ for the first time in history – a week earlier than planned.

Moray Council had already agreed to fly the flag in recognition of the Stonewall Riots and to mark the anniversary of Equal Marriage legislation coming into force in Scotland.

However, following the devastating tragedy that saw 49 people killed in Florida at the weekend – shot as they enjoyed a night out at a gay club in Orlando – the local authority has agreed to a request by the region’s only openly gay Councillor to fly the flag a week early.

“Today, for the first time in history, the Rainbow Flag will fly atop The Moray Council Chambers,” Fochabers/Lhanbryde councillor Sean Morton told insideMoray.

He added: “As the only openly gay councillor in Moray’s history, I had asked to see the flag raised next week to mark the anniversary of the Stonewall Riots and the legalisation of Equal Marriage in Scotland.

“However, given the tragic events in Orlando it is only right that we fly the flag earlier to show our solidarity. So many innocents have had their lives snatched from them.

“We in Moray will be proud of them and we will remember them for that is the only way to beat those who hated them.”

Moray MP Angus Robertson, who also suggested raising the flag early, said: “The attack in Orlando was utterly horrific and an unimaginable horror for the victims and everyone close to them. The flying of the rainbow flag in Moray marks our solidarity with those affected by this terrible act.

“This act of extreme hate is a stark reminder of the prejudice and discrimination that lesbian, gay, bisexual, transgender and intersex people continue to face. We all have a responsibility to challenge the culture of homophobia and all other forms of prejudice that exist in society, in all its forms.”

A rainbow flag flew over the Scottish Parliament yesterday at half-mast as Parliamentarians from all political groups stood in silent tribute to those killed in the Orlando atrocity.