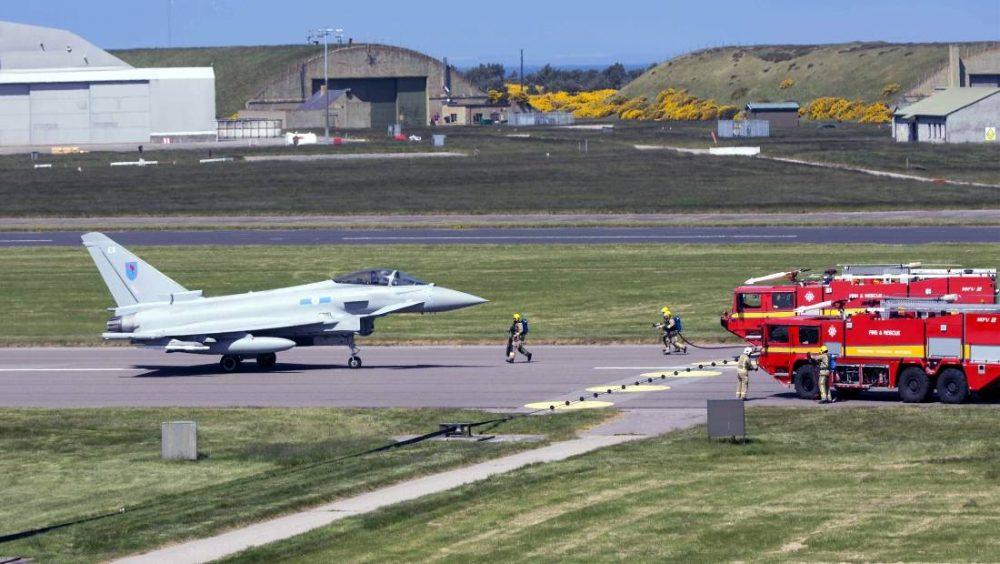 A TEST FLIGHT saw an RAF Lossiemouth Typhoon landing at nearby Kinloss Barracks – the first of several such exercises now set to take place between the two Moray bases.

The landing was undertaken by an aircraft from 6 Squadron to prove the capabilities of the former Nimrod base as suitable as a diversion airfield for Lossiemouth-based aircraft.

While regular military flying from Kinloss ceased in 2011 the airfield has been maintained as a Relief Landing Ground (RLG) since. That role is likely to become all the more important as an additional Typhoon squadron is scheduled to arrive at RAF Lossiemouth alongside nine P8-A SAR aircraft in the next few years.

Squadron Leader Rob Coffey, the Executive Officer (Ops Wing) responsible for ensuring all flying operations from RAF Lossiemouth are co-ordinated and managed safely, said: “As we had not had to use Kinloss for a real Typhoon diversion since its inception as a Relief Landing Ground, we planned this exercise in order to practice our procedures and aircraft recovery actions.

“The exercise was an opportunity for the Fire Section in particular to practice their actions after the use of the Rotary Hydraulic Arestor Gear, alongside ground engineering personnel, and also for dealing with an aircraft with hot brakes.

“All of our procedures worked well and the exercise provided excellent training for the RAF personnel based at Kinloss as well as the Typhoon crews at RAF Lossiemouth.”

While Lossiemouth-based Tornadoes have used Kinloss as a backup airfield it is the first time they Typhoon has done so.

Squadron Leader Coffey added that the exercise at Kinloss Barracks would need to be repeated in the coming years to ensure the procedures remained fit for purpose.