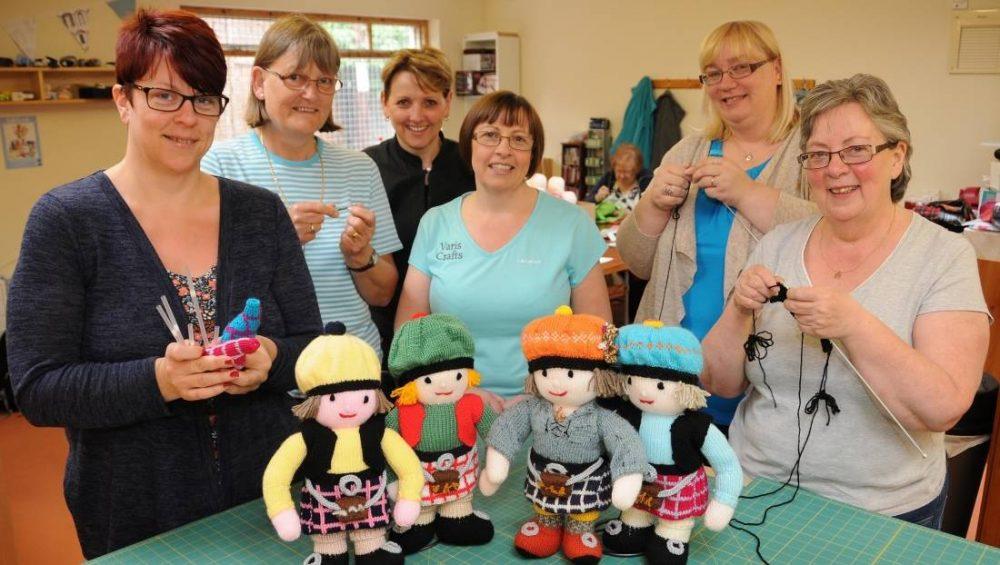 SCOTLAND’S QUIETEST PIPE BAND are being prepared for an appearance at the European Pipe Band Championships (Piping at Forres) in just a few weeks.

A team of volunteers have been hard at work for weeks in creating the woollen pipers which will be sold in aid of charity in what has become a tradition since the championships first arrived in Moray three years ago.

Behind the ‘silent pipers’ are a team of volunteers who have been working out of the Varis Crafts in Forres, who got busy with their knitting needles in March to be ready in time for the Championships on June 25.

Each piper takes around a week to complete and are being sold at £35 for either a piper or drummer.

The initial idea in 2013 was created by 82-years-young Betty McKay in aid of the Highland Hospice – and were so popular that Betty has knitted them every year since, raising thousands of pounds for the charity where she works as a volunteer in their Forres shop.

Sadly, this year Betty has been unable to knit all the pipers due to pain in her wrist – but in true community spirit Sharon Robertson of Varis Crafts stepped in to help keep up the tradition and formed a number of willing volunteers who give up their time to help get the pipeband together. The pipers will be sold in aid of the Highland Hospice and Moray MS Support Group.

Sharon said: “I was honoured to be asked to take over the knitting of the pipe band. It has only been possible because all these ladies turned to with their needles and have been fantastic in producing the current pipe band.

“Without that Band of Knitters it just couldn’t have been done in the time frame available. At Varis Crafts I have always striven to support local groups and charities and this has been another way to be involved. All credit to Betty who initiated the undertaking!”

Alan James, Chairman of Forres Events Ltd, who run the event as not-for-profit said: “Betty has done a fantastic job in knitting these pipers for the last few years and it is really touching that Sharon and her team have stepped in to keep knitting for such good causes.

“This demonstrates a wonderful community spirit which is at the heart of the origin of hosting these championships and makes all the hard work worthwhile!”

The pipeband will be on sale from a week before the event from Varis Crafts in Forres or on the day at the Varis Craft stall in the craft village at Piping At Forres.

A record 127 bands have signed up for this year’s Piping At Forres, including 11 grade 1 bands and bands from Denmark, the Netherlands, the Republic of Ireland and Australia. Chieftain for 2016 is former Runrig frontman and critically acclaimed solo artist Donnie Munro.

Tickets are now on sale until 19 June at Beaver Travel in Forres and Elgin; Brodie Countryfare, The Bookshop, Logie Steading, Brambles Boutique, Nairn, Ewe & Me, Aberlour and Grantown-on-Spey or online at www.pipingatforres.com.

Tickets are in the form of wristbands allowing the ticket holder to exit and enter the park throughout the day.