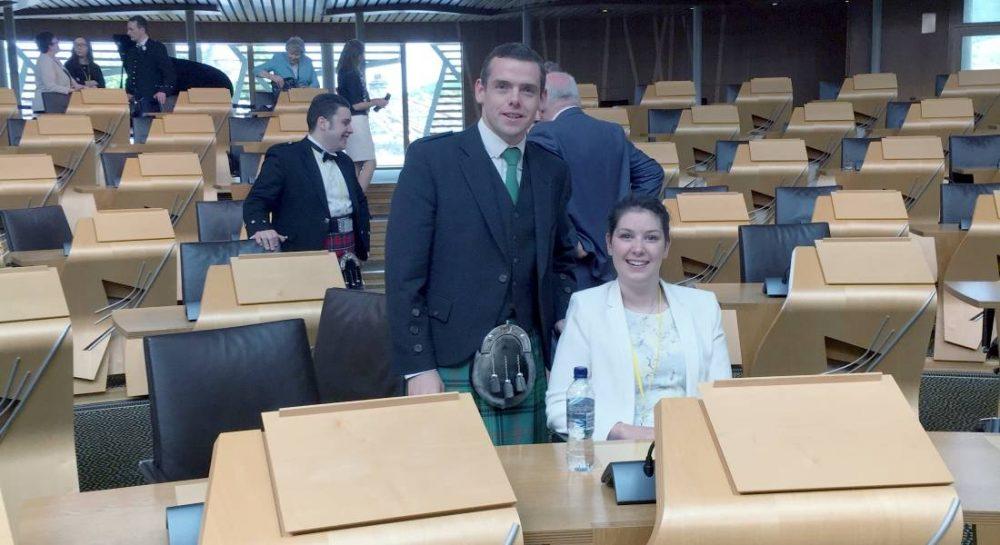 A SPECIAL GUEST at the opening of the Scottish Parliament at the weekend took time out from her own amazing fundraising efforts to enjoy the pomp and ceremony as a special guest.

Lucy Lintott joined local MSP Douglas Ross as his guest at the Royal Opening of the fifth session of the Parliament, before joining the ‘Riding’ procession down the historic Royal Mile.

Mr Ross selected Lucy as his guest in recognition of her amazing fundraising efforts since being diagnosed with Motor Neuron Disease. The Garmouth resident went on to keep an immediate promise to raise £100,000 for the MND charity – a stunning achievement that has deservedly earned her local and national plaudits.

“Each MSP was allowed to nominate a local hero to join them at the Royal Opening and I was delighted Lucy and her parents could join me,” Mr Ross said.

He added: “Lucy’s determination to deal with Motor Neurone Disease by throwing herself into activities and fundraising is an example to all of us for how we should live our lives. She has done so much and raised huge amounts of money to help in the research into MND.

“It was great having Lucy at the opening and then we went back into the Parliament building where I was able to introduce her to numerous people including the Secretary of State for Scotland, David Mundell, which allowed Lucy to discuss her Points of Life award with him.

“Lucy kindly gave both myself and the Secretary of State wristbands so we can proudly show our support for Lucy’s fight, her campaign to tell people about her battle with MND and to raise awareness of the disease.

“You can’t help but be inspired by everything Lucy has done and plans to do. My day at the Royal Opening was made a lot more special by having Lucy there and I hope we can continue to work together to raise awareness and funds for MND in Moray and across Scotland.”