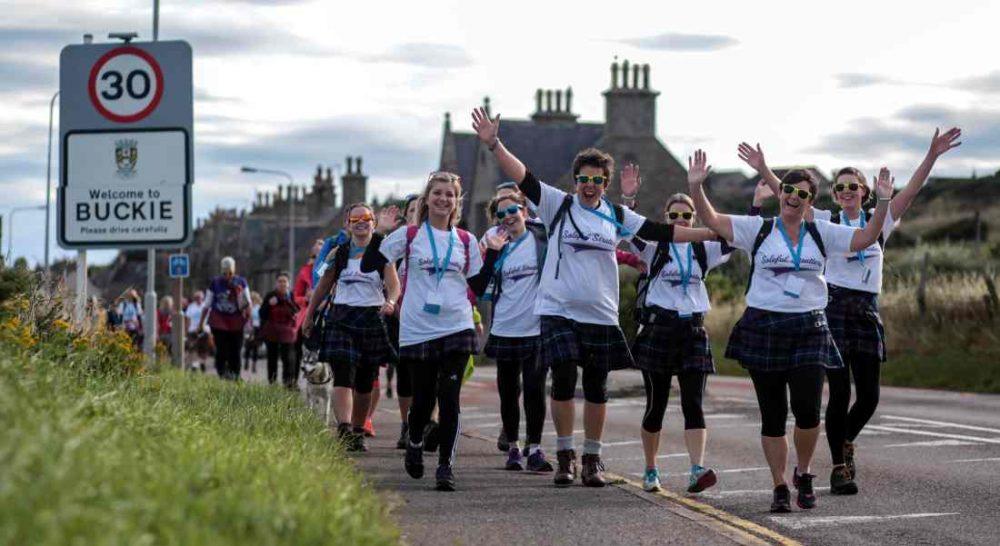 OVER 600 TURNED out to walk the walk on Saturday when the Moray Speyside Kiltwalk returned with a bang after a one-year absence.

It was the third time the event has been held – but the first since its re-launch as the Royal Bank of Scotland Kiltwalk, a series of events around Scotland that has already raised over £650,000 for several children’s charities.

“It’s inspiring to see so many people come together with one goal in mind – to raise much-needed funds for the children in Scotland who need it most. As with all Royal Bank of Scotland Kiltwalk events, every single penny raised will go to the children’s charities of each individual walker’s choice.

“Everybody who took part, whether by walking or volunteering, should be extremely proud. We are also beyond grateful for the support of our title sponsors Royal Bank of Scotland and the event’s gold sponsor Johnston Carmichael.”

Walkers taking part in the event tackled either the six-mile Wee Wander, the 13 mile Big Stroll or the 26 mile Mighty Stride, taking in some of Scotland’s most scenic and rugged landscapes.
More than 60 volunteers, affectionately known as “Kilties”, lined the route, cheering the Kiltwalkers on as they marched.

Malcolm Buchanan, chairman of the Royal Bank of Scotland’s Scottish board, is full of praise for Moray Speyside’s Kiltwalkers. “Thank you and well done to everyone who took part in the Moray Speyside Kiltwalk”, he said.

Mr Buchanan added: “It’s inspiring to see so many people coming together to support some great charities that help people in need in Scotland.

“The Royal Bank of Scotland is a proud partner of the Kiltwalk and colleagues joined customers and friends to help raise money for the STV Children’s Appeal. We are all looking forward to the final Kiltwalk in Edinburgh and we would encourage everyone to get their boots on and take part.”

There’s one final chance to take big steps for little people by walking the Royal Bank of Scotland Kiltwalk this year, in Edinburgh on September 18. You can sign-up at www.thekiltwalk.co.uk.