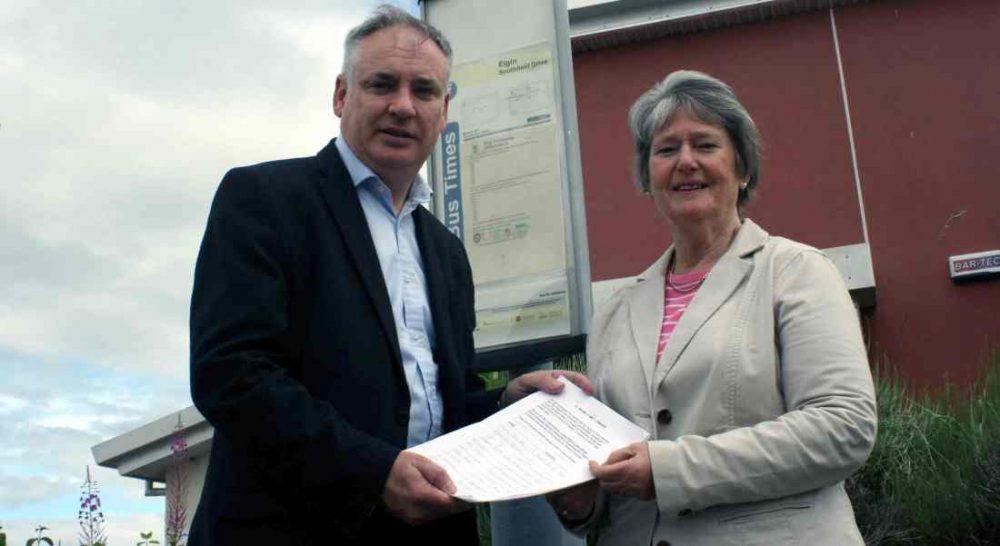 FEARS OVER THE long-term future of a popular bus route serving new homes in the south of Elgin have prompted a petition.

Two services provide a link with the town centre and the Linkwood Medical Centre – one, the 340, is funded by house builders Robertson and Scotia Homes, while 341 is a commercially run service – both are currently provided by Deveron Coaches.

Regular users of the routes believe that there are only around 10 months remaining of an 18-month agreement to run the services – and now dozens have signed a petition calling for an assurance that they will not be withdrawn.

The petition was organised by Fiona Oswald, 68, who has recruited the help of local MSP Richard Lochhead – who has said he will write to Deveron to learn what their intentions are.

Mrs Oswald said that the bus service is a ‘vital link’ in particular for elderly residents who rely on it to get them to the medical centre.

The MSP said: “It is clear there is a demand within the community for the 340 and 341 bus services to continue, which is demonstrated by the petition which has attracted 135 signatures.

“The buses were introduced last December as an 18-month service and I can understand why bus users, who are beginning to rely on the service, are keen for some assurance that the service will continue.

“I am told that the buses have become increasingly popular as people realised that they can use their bus passes.

“Public transport needs to be accessible and there is a lot of expansion in this part of Elgin so it would seem sensible for a regular bus service into Elgin town centre.

“I have therefore written to the owner of Deveron Coaches highlighting the call from the community and seeking some assurance that the buses will continue after the initial 18-month period has lapsed.”

A spokesman for the local authority said that the future of the bus service would depend on contributions from Robertson and Scotia Homes – adding that the issue would be discussed by councillors.