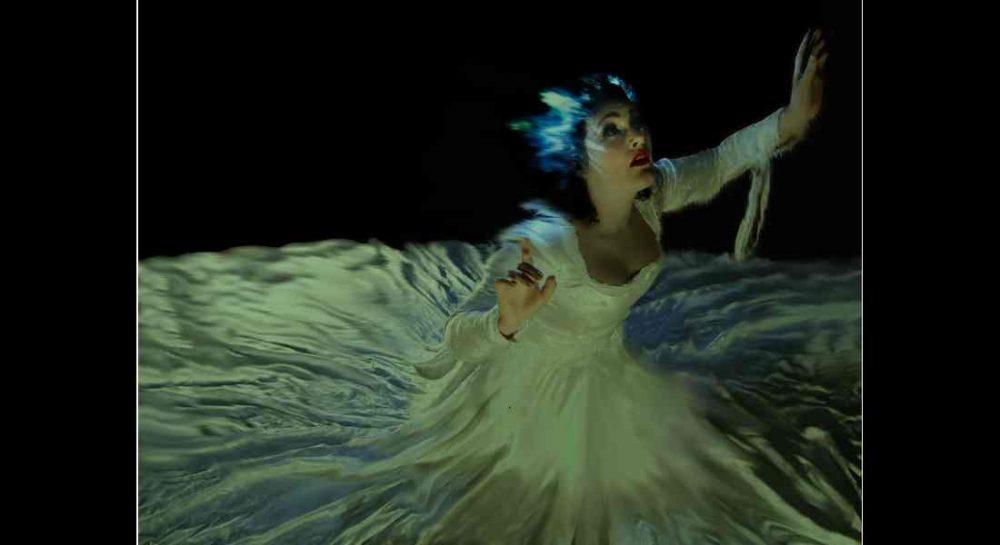 insideMoray is pleased to feature a theatre review by Tim Flood (floodfilm.com) of ‘Death of her Brother’, which played at the Drouthy Cobbler last Friday.

Two living statues (a tableau vivant) inhabit the dark yet intimate stage of the Drouthy Cobbler in Elgin.

A Friday night at the theatre does not come smaller than this although the play is addressing the immense themes of destiny, love and tragedy. Based on The Death of Tintagiles by Maurice Maeterlinck – one of a series written by the Nobel Prize winner (Literature) Maeterlinck as a Drama of the Unconscious and Instinct.

Death of Her Brother has been devised and rewritten by Rose Oke Millett, Steve Coomber and Charis Edward Wells to take down to the Edinburgh Fringe.

Produced by Moray based Dandy Trap and directed by Steve Coomber, this astonishing production taps immediately into the unconscious and the emotional basement of our souls. Throughout, the play is a gripping spectacle, Ali Ross and Toby Spreadborough, the lighting designers, making the most of simple underlighting and mesmerising front projections designed by Charis Edward Wells, whilst the lead performer carries her own illumination in the form of LED bulbs twisted into her hair giving a ghostly intensity to her pallid face.

The cast is supported by a throbbing undercurrent soundscape created by sound designer Dave Martin. Both lights and sound transport the audience to the lair of a mysterious queen in her castle of shadows.

But it is the players who cast the spell that hold us there. Charis Edward Wells, in a dark cloud of swirling cobwebby costume and outlandish white makeup and hair, weaves through the shadows creating the voices of Anna’s head.

One moment a little boy, the next an all powerful Monarch, Charis shows great skill and sensitivity in her portrayal and the chemistry between the leads is palpable. Steve Coomber plays a snivelling servant costumed horribly in dripping beige. He shocks both the audience and the characters – breaking into their landscape of black and white, female voice on female voice, bringing in a very masculine, terrifying threat.

There are many reasons to go to see this show but if you don’t see it you will miss a rare treat and that is the performance of the lead. Rose Oke Millett plays Anna.

From her first twitch in the tableau vivant to her last gasp of despair at her final failure, she is bewilderingly magnificent. The smallest flicker of her eyes or a sharp intake of breath are all performed with an intensity that I have not seen on stage since the Royal Shakespeare Company came to Forres.

This was acting of the highest calibre. I was recently at Eden Court and the actors on their stage paled into insignificance when compared to Rose’s delivery. I am sure that if Maeterlink’s ghost could see this performance he would be overjoyed to see how Millett’s characterisation taps into his drama of Unconscious and Instinct.

You now have to go to the Fringe to see this fantastic play – it will run at Grassmarket Sweet Venue 18, from the August 5 to 21 at 2:30pm every day. If you can, go see it!