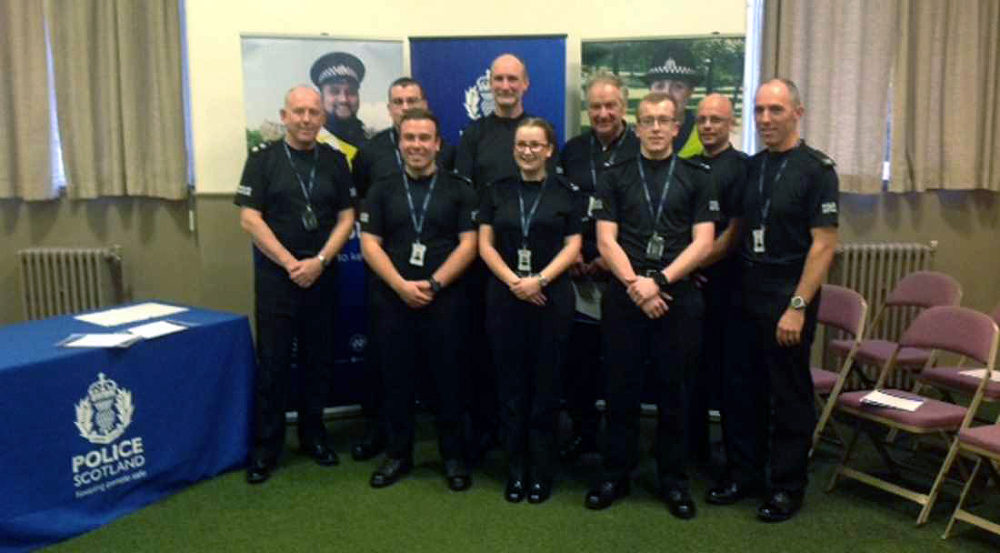 THE VITAL ROLE being played by special constables in Moray and throughout the North East has been commended at a special presentation.

Eleven ‘specials’ were presented with certificates by Chief Superintendent Campbell Thomson and Superintendent George MacDonald at the Inverurie Town Hall.

Over the last year the 11 have been attending duty for over 300 hours – and in once case in excess of 400 hours – at police offices throughout the region, including Elgin.

The Special Constabulary is a part-time, volunteer body consisting of officers with similar powers to that of police officers. They work alongside officers to forge strong partnerships in the community, patrol our streets, prevent crime and interact with all kinds of people to help keep local communities safe.

Superintendent MacDonald said: “Members of the Special Constabulary provide a vital link between policing and the public, using their skills and knowledge from their day jobs and the communities they live in to benefit the police service.

“The role is diverse and can be demanding – you could be doing anything from policing a football match or major event to assisting at a road accident – but it is incredibly rewarding. For people considering a career in the police it is also a great opportunity to see what working for the force is like.

“I would like to say a special thank you to the Special Constables who attended for the exceptional commitment they have shown to local policing, and it is our pleasure to present them with a certificate to recognise their commitment and enthusiasm for their roles. I know that they take great pride in what they do.

“I cannot overestimate the importance of the contribution of Special Constables and I hope they have found their experiences as valuable as we have valued their time and efforts.”

Special Constables undertake a training programme similar to that provided to regular probationer police officers – and that is held in their own spare time at weekends. The training is split into two phases – an induction phase followed by further legislative and investigative development. Upon completion of the initial induction, you will be sworn in as a Special Constable and deployed in the local area of your choice.

Superintendent MacDonald added: “Special Constables bring with them an extensive pool of skills, talents, experience, local knowledge and diverse backgrounds which enhance the overall level of service provided by the police. I would encourage anyone interested in becoming a Special Constable to get in touch to find out how it could suit your lifestyle.”

Further information can be found in the recruitment section of the Police Scotland website – http://www.scotland.police.uk/recruitment/special-constables/