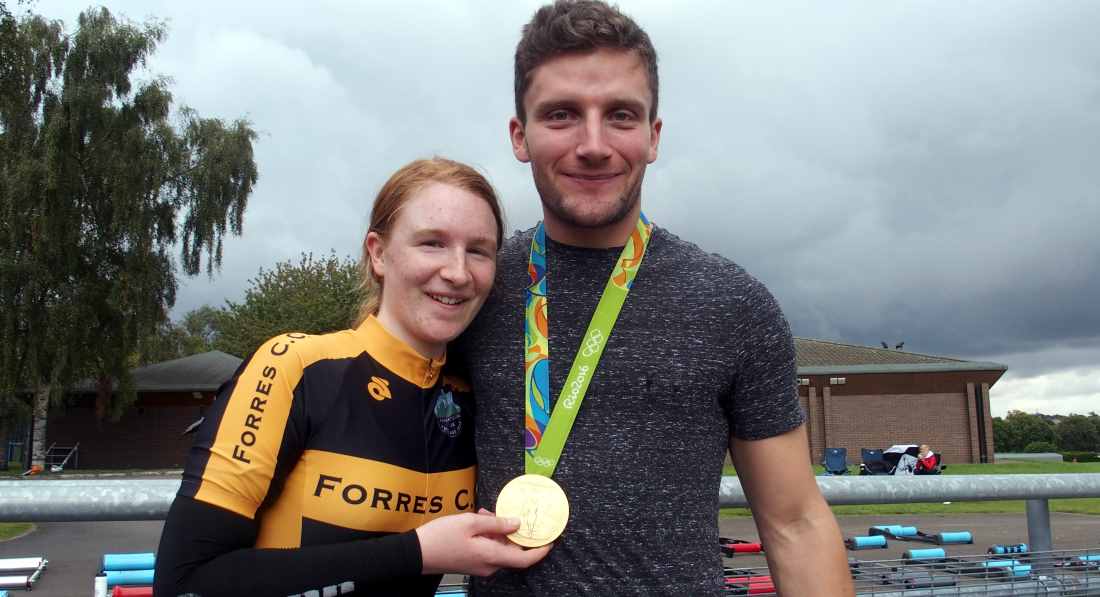 A MILTONDUFF CYCLIST has expressed her delight after teaming up with Olympic Gold medal winner Callum Skinner.

Georgia Mansfield has her own dreams of competing at the highest levels – so when she attended a young cyclists’ training session at the outdoor velodrome, organised by Scottish Cycling, she was thrilled that Callum dropped by to offer encouragement.

The road cycling skills training helps Georgia on her route as she aspires to a similar career in GB cycling. Just 24 hours before meeting Callum, Georgia had a podium finish in a gruelling 42-mile Scottish Cycling road race on Deeside.

Georgia said: “It was the best feeling ever – all the months of training and hard work paid off. Meeting Callum was fantastic – he’s such a nice guy, and so deserves those gold and silver medals.”

So far the Forres CC club member has taken silver at the Scottish National Junior road race championship this year. She can be seen training throughout Moray while competing on selected road race events around the country.

However, she faces a massive disadvantage as to gain experience on track cycling means travel to Glasgow or Dundee.

Now ‘Project Georgia’ has been set up by Moray Wheelers to raise funds and support Georgia in her quest for national success.

Group members regularly transport Georgia all over Scotland and help with the costs of other travel, nutrition and equipment – but more funds are desperately required to keep Georgia racing next season.

To help her a fundraising Ceilidh is being held in the Duffus Hall on November 26 – Sheila Scott is the chair of ‘Project Georgia’ and can be contacted via email to sheila@endhoose.demon.co.uk or by calling 01343 862930.