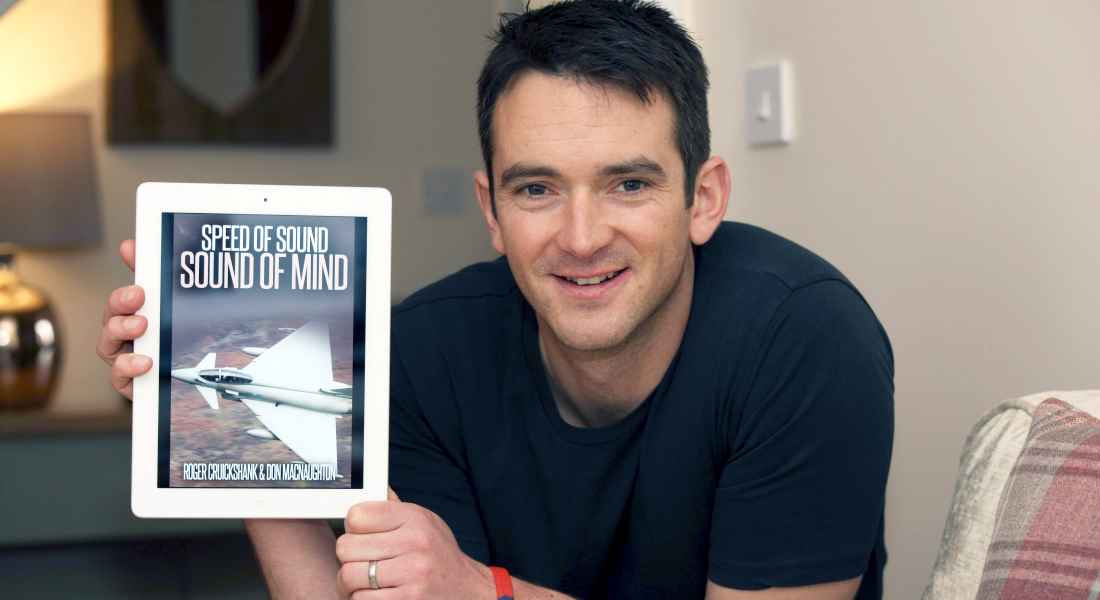 OVERCOMING LIFE-CHANGING and horrific events is the subject of a new book penned by an RAF Lossiemouth pilot will provide a boost to two national charities.

Roger Cruickshank has joined forces with sports performance coach Don McNaughton in producing the book ‘Speed of Sound – Sound of Mind’ that is being launched this weekend.

The book is an often moving study drawn from Roger’s own experiences as a 22-year-old star of the British Olympic ski team when he smashed his leg in a fall. Doctors warned that he may never walk again, let alone ski – and that his RAF career was in serious jeopardy.

However, he fought back from his injuries to compete in the Winter Olympics just ten months later – with nine titanium pins and a plate in his leg.

Don, who was working with the British ski team at the time, helped Roger to deal with the psychological aftermath of his accident – but then Roger suffered terrible facial injuries in a mountain biking accident shortly before qualifying as an RAF fighter pilot.

There was an even greater tragedy still to come, when his beloved mother Ann, who had supported him throughout his recovery, died by suicide six years ago.

Speed of Sound, Sound of Mind tells of Roger’s incredible comebacks in sport and flying and his heartache over his mum’s death, combined with advice from Don on using progressive psychological approaches to overcoming adversity.

The pair hope the book will help break the taboo around mental health and encourage those affected to talk about their problems – and also provide a financial benefit for two important charities, Help for Heroes and SAMH.

Roger said: “I never thought that my mum had any problems at all and she was who she had always been, my mum. Her suicide on April 10, 2010, at the age of 54, was completely unexpected. It was her decision to take her own life but, if she had been in a position to talk to someone, then maybe she would have been able to get over what was troubling her at the time.”

Ailsa Alcock, Scottish income manager for Help for Heroes, said the charity was delighted that Roger and Don had chosen to support it and raise much-needed awareness of mental health issues. She said: “Their book is so inspiring and the vital funds raised will help us to support more wounded, injured and sick service personnel and veterans to overcome the challenges they face.”

Jo Anderson, Director of External Affairs for SAMH, added: “Suicide devastates families like Roger’s and one of Scotland’s biggest killers is not talking.

“We want to thank Roger and Don for supporting the work of SAMH and encouraging others to talk about suicide through their new book. At SAMH, we want everyone to be able to have that crucial conversation to help those in need and break down stigma around suicide.”

Roger and Don can also be contacted directly through their Facebook Page.