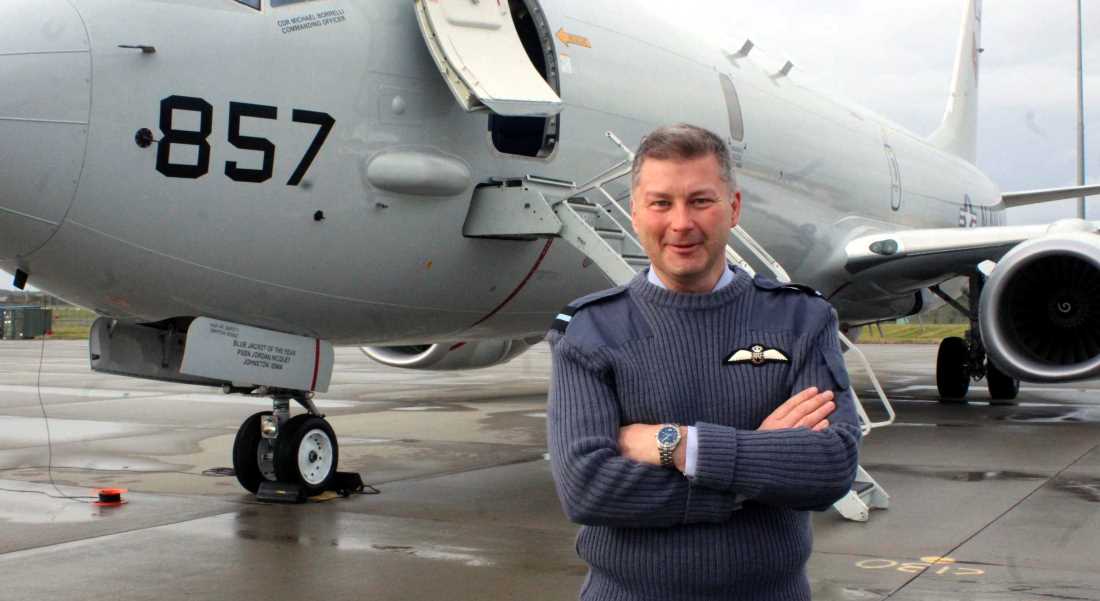 AIR COMMODORE IAN GALE proudly showed off the future of RAF Lossiemouth to a group of civic and political leaders at the Moray base yesterday.

The former Station Commander has retained a strong affinity with the local community – making it fitting that he should lead the transition of the base to becoming the UK’s home for a renewed maritime air role for the Royal Air Force.

Ian led his visitors through a briefing on just why the RAF chose to go down the road of the P-8A, a truly state of the art aircraft that was built on the very solid and proven Boeing 737 platform.

insideMoray was one of only two local publications invited to attend the briefing – and we grasped the opportunity to chat with Ian about the capabilities of the aircraft that will soon be as well known in these parts as the Covesea Lighthouse.

Before we started, insideMoray’s editor – a former RAF Telegraphist – pointed to the weather section of the pre-flight briefing given to his guests, and the continued use of the TAF (Terminal Aerodrome Forecast) system which he himself had used over 34 years ago.

“The funny thing about innovation in the world generally is that we like to take things little by little – we get so established by a system that everyone looks on as normal,” Ian said, adding: “When you show it to other people who are not versed in it then it just appears to be some strange code! But for old pilots like me, I just read that like English and it makes complete sense.”

Ian demonstrated an App he has on his mobile phone that interprets the TAF ‘code’, adding: “That’s how the P-8A works, this business about open architecture means that it is very unlike the old days, when you would integrate new software that changed everything.

“You had a nightmare of certification, testing and such things. New aircraft like the P-8A are not like that – if you want to change part of the mission you just get the App for that which has nothing to do with the wider software. This means that you can bring it in quickly, you can modify it quickly – you can do all these things and that brings us another major advantage.”

That, the Air Commodore explained, is why the RAF is in the long run much better off with the P-8A than they would have been had the Nimrod project been allowed to continue.

He explained: “Where we are now is the Nimrod was fatally flawed, something that I think is well out there in the public domain. We are now with an aircraft that is at the start of its life cycle, an aircraft that is electronically aware, full enabled, using open architecture and looking to communicate with other fifth generation platforms.

“The RAF is now in a transition to the fifth generation air force, which is the newest, most integrated and most effective level and this is absolutely at the heart of our P-8A procurement.”

While aircraft enthusiasts will look upon the arrival of the P-8A with excitement, for many in Moray it is perhaps just another noisy aircraft for them to contend with.

For all, however, there is the lift that the arrival of Boeing and their aircraft will bring to the local Lossiemouth and wider Moray communities.

Ian said: “It really is a massive thing for the entire local community here at Lossiemouth – and I guess what I feel, as someone still living here, is that this is the return of Maritime Patrol Aircraft to its homeland if you like, this is a massive thing as many people I’m sure will understand.

“It is going to have the actual impact of providing a lot more jobs – Lossiemouth in particular will expand and become even more vibrant.

“But above all for me it is the return of aircraft with maritime capability to its heartland – and that, I think, is a wonderful thing.”