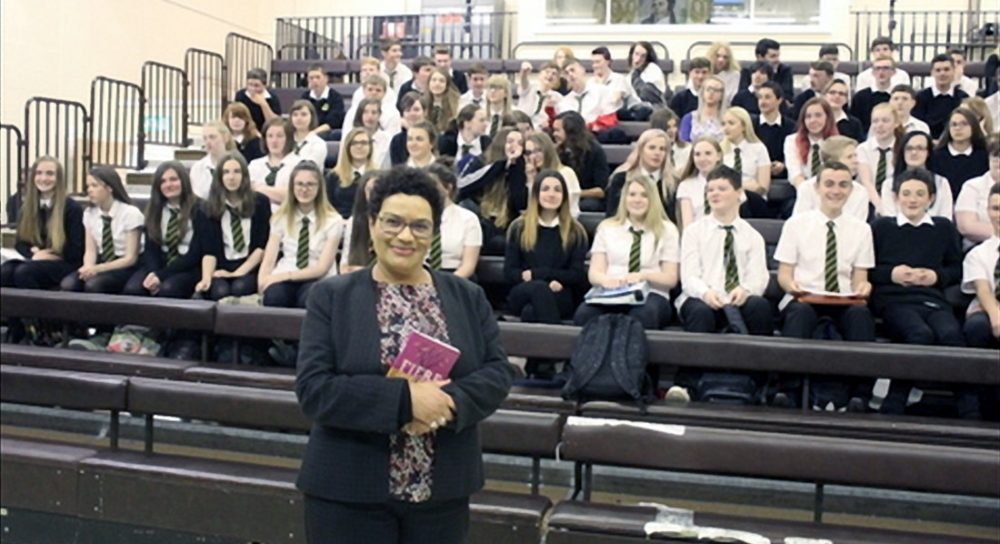 SCOTLAND’S NATIONAL POET has called in at a Moray school this week to talk to pupils who are studying her work as part of their National 5 examinations.

National Poet for Scotland, Jackie Kay, called in at Milne’s High School where she met fifth and sixth year pupils who are studying six of her poems that form part of the Scottish ‘set texts’ list.

The Poet spoke of events in her life that led to her writing poetry as well as the works that inspired her, while during the morning session with pupils she shared insights into her own work and specifically the poems they are studying.

A spokeswoman for the school said: “Jackie also spent an hour with the Higher class helping them to think about idea for their own creative writing.

“This was inspirational as well as very useful for the pupils as creative writing forms part of their folio which contributes to their exam. In the afternoon, Advanced Higher pupils from across Moray arrived at the school to join Jackie in a workshop which also concentrated on creative writing.

“She helped the pupils to think about writing from a different perspective and in a different voice.”

The spokeswoman added that the school had been surprised when Jackie accepted their invitation to spend the day with pupils, adding: “We feel privileged to have had the Makar share her knowledge and background with our pupils, who greatly benefitted from her expertise in the use of language and how use it to improve their work.”