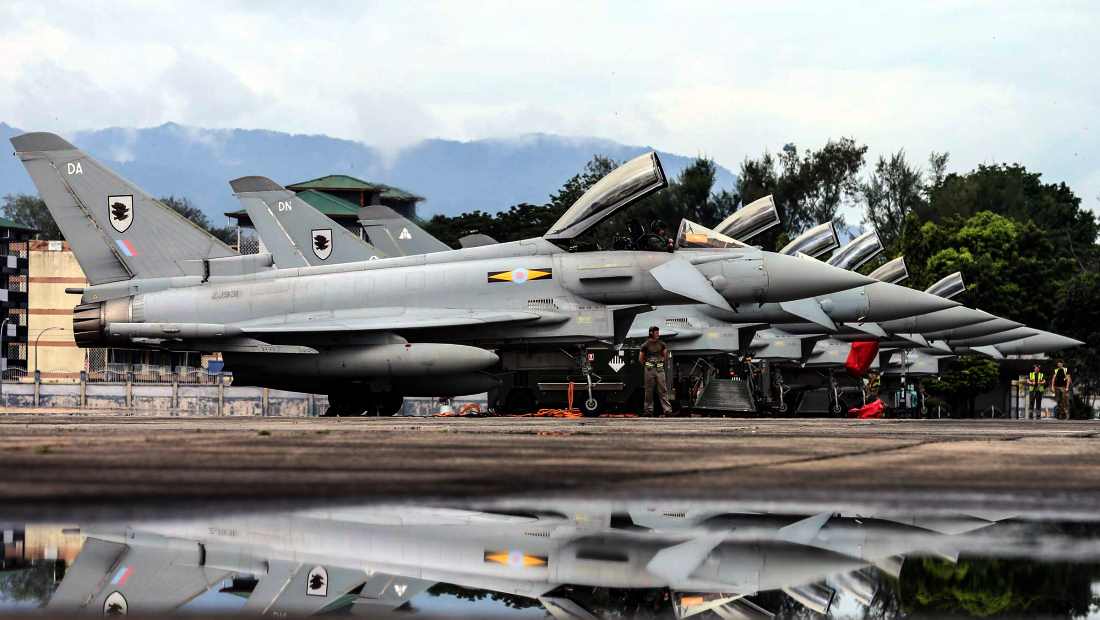 JAPAN AND KOREA are the next destinations for RAF Lossiemouth air and ground crews who have just completed their ‘Exercise Bersama Lima 16’ stint in Malaysia.

Eight Typhoon jets from 1(Fighter) Squadron at the Moray base took part in the exercise – one of the most ambitious ever undertaken by an RAF unit.

For the last three weeks they have been working alongside forces from Malaysia, Singapore, Australia and New Zealand from their Butterworth base in Malaysia.

Before the squadron headed for the next stage of their operations in the region, many of those involved attended an official closing ceremony at the Changi Naval Base in Singapore.

The RAF Lossiemouth contingent was part of a compliment from all three UK services who were taking part in the Five Powers Defence Arrangements (FPDA) exercise, at the close of which Rear Admiral Ken Cheong from the Singapore Navy said: “Over the last three weeks, the level of cooperation, interoperability, trust, understanding and professionalism have been very high and all training objective were safely achieved.

“We leave the Exercise as better friends as better comrades and with a better understanding of each other, all working to a common goal.”

Throughout the exercise the Typhoons carried out air combat and control of the air sorties, drawing particular praise from their Australian counterparts both for their professionalism and the quality of their aircraft.

Representing the UK at the closing ceremony was Rear Admiral Simon Ancona, who said, “Exercise Bersama Lima 16 proved yet again to be a hugely successful exercise, fulfilling its aims, from the tactical to the strategic and everyone has learnt something from this Exercise.

“The FPDA is the only defence arrangement that exists in South Asia and it is hugely important for the UK. Participating in this exercise shows our commitment to this vital arrangement.”

Speaking on behalf of the RAF contingent was Squadron Leader Julie Merrison, who said: “Exercise Bersama Lima 16 provided me the unique opportunity to work in a tri-Service, multi-national environment, alongside personnel from nations I would not often work with.

“The Exercise has been one of the many highlights of my RAF career.”

Meanwhile the 1(Fighter) Squadron aircraft have been joined in Japan by four Typhoons from II(AC) Squadron, who arrived in Japan on Saturday.

On arrival at the Misawa air base, squadron OC Wing Commander Roger Elliott was first to land to be greeted by a formal welcome. He said: “Thank you for such an amazing welcome here to Misawa Air Base. I’m absolutely positive that all members of my Squadron and detachment from across the Royal Air Force, will have a tremendous experience with the JASDF.

The arrival of II(AC) Squadron on Honshu Island marked the first time Japan had hosted a foreign air force from a nation other than the United States.