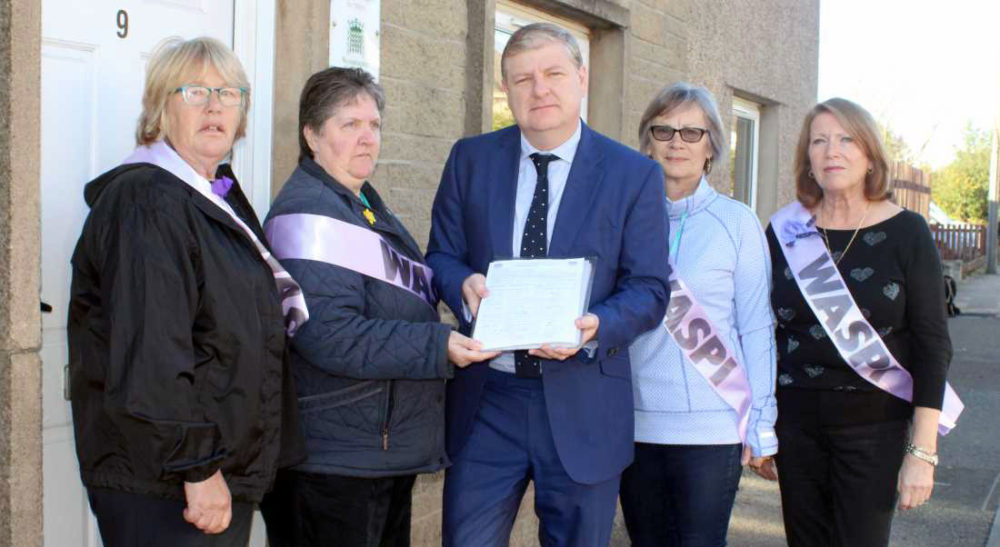 MORAY WOMEN WHO are campaigning for a fairer deal over changes to the state pension age have delivered a 1200-signature petition to Angus Robertson MP.

Local members of the WASPI (Women Against State Pension Inequality) met with the Moray MP at his office in Elgin on Thursday to deliver what is one of many such petitions from throughout the UK.

Their campaign relates to UK Government state pension changes for women, many of whom have been working since the 1960’s expecting to collect on their pensions when they reached 60.

However, for those born after April 5, 1951 the pension age has been put back in stages – but in many cases the system failed them and they had not been fully informed until very close to their original retirement date that their pensions would not be paid for up to six years.

Mr Robertson and his SNP colleagues at Westminster have raised the issue in the Parliament, calling on a change to the transitional arrangements which they say are simply unfair in both their severity and their method of imposition.

The Moray MP has raised the matter during Prime Ministers Questions and recently joined Moray WASPI campaigners on Elgin High Street. Now he will take their petition to the Parliament.

Mr Robertson said: “Moray’s WASPI campaigners have every right to be upset and angry with the UK Government on this issue.

“It is a long-held principle that when pension changes occur people should be given the right amount of time to adjust their pension plans. Pension plans are made over decades and for the UK Government to accelerate these changes without making the time available for people to change their retirement plans is grossly unfair.

“Millions of women are affected by this across the UK with several thousand of that number being right here in Moray.”

A spokeswoman for WASPI Moray said: “We are delighted to have the support of our local MP – and we call on all elected representatives in Moray, regardless of their political affiliations, to make their views on this grossly unfair issue known.

“WASPI has now grown to over 40,000 and all of them are seeking an indication from the UK Government that a situation where some women born just a few months apart are now to receive their pensions several years apart. It is quite clearly an unfair and poorly executed system.”