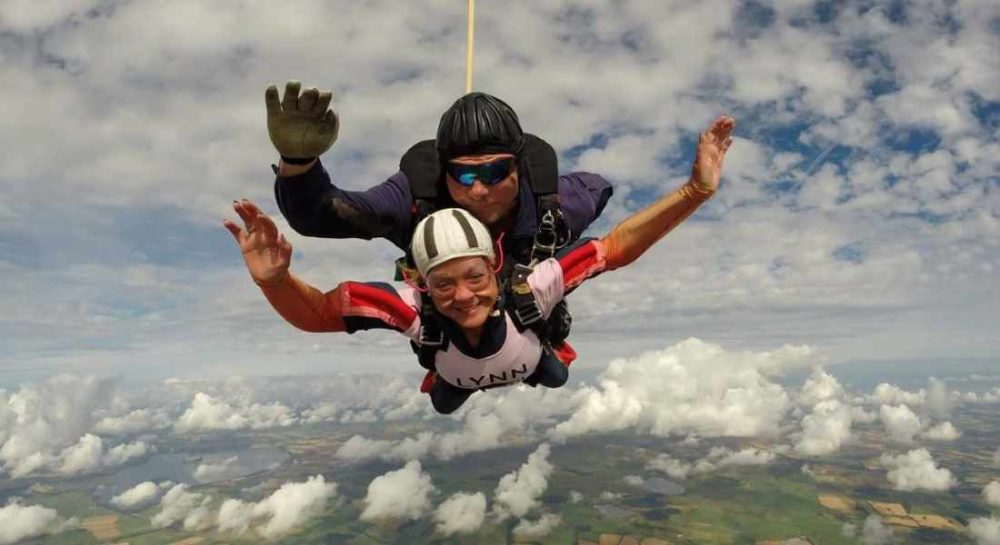 OVERCOMING YOUR PERSONAL DEMONS when taking on a charity skydive for the first time is a difficult enough task – but when the weather keeps you waiting it only adds to the anxiety.

However, a trio of Moray friends refused to let anything stand in the way of their determination to take the ‘leap of faith’ from a light aircraft – and raised over £5000 in the process.

The fundraising idea was kicked off by Pauline Grant, who decided that she would jump to raise funds for Prostate Cancer Scotland after her husband was diagnosed with the condition – thankfully he underwent a successful operation just weeks before Pauline took to the sky.

For her friend Allyson Siniecki, MND Scotland was the chosen cause that would tempt her to done a silk-loaded backpack and leap from the aircraft. “I was inspired by Lucy Lintott, who had been diagnosed three years ago,” Allyson said.

Completing the trio of hardy Moray women was Lynn Smith, who jumped in aid of her own charity, ‘Hayley’s Help’.

She said: “I set that up after the death of my daughter three years ago. The charity aims to help local people and their families who face financial difficulties while in hospital or in recovery from illness.”

Pauline said that they were all absolutely thrilled to finally get their effort off the ground after it had to be cancelled because of the weather – twice. She said: “Due to the very generous donations from our families and friends, the final total from sponsorship reached over £5000.

“This is a fantastic total and we are all delighted to share it equally between our chosen charities. We would like to say a huge thanks to everyone who contributed in any way.”