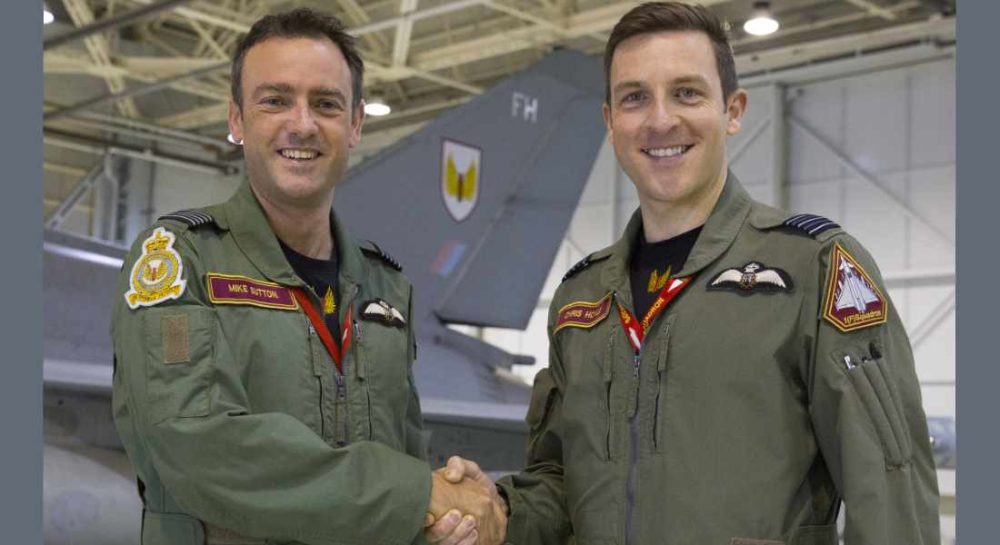 A NEW BROOM has swept into RAF Lossiemouth in the form of a new boss for the UK’s oldest fighter squadron.

Wing Commander Sutton was appointed CO of the oldest RAF flying squadron when it relocated to RAF Lossiemouth in September 2014.

Commenting on his two years in Moray he said: “I have thoroughly enjoyed the last two years and it has been a privilege to work with such a professional and committed team.

“The Squadron has performed exceptionally well on QRA, Exercising and Operations, and I wish Wing Commander Hoyle every success as he takes the reins of the oldest and finest Fighter Squadron in the world.”

Chris Hoyle takes command of the fast jet squadron having recently completed the Advanced Command and Staff Course at the Defence Academy Shrivenham.

His previous position was as SO2 Electronic Warfare and Threats on 92 (Reserve) Tactics and Training Sqn at the Air Warfare Centre, RAF Waddington. This will be his first posting in Scotland, having previously flown the Typhoon at RAF Coningsby.

He said: “It is an honour and a pleasure to join 1(Fighter) Squadron today. I thank all those who through professionalism, dedication and commitment have brought this Squadron to this point in such fine style.

“Together with the ladies and gentlemen of this illustrious squadron, I look forward to serving our nation and writing the new chapters of the Squadron’s history as we tackle the challenges that lie ahead.”