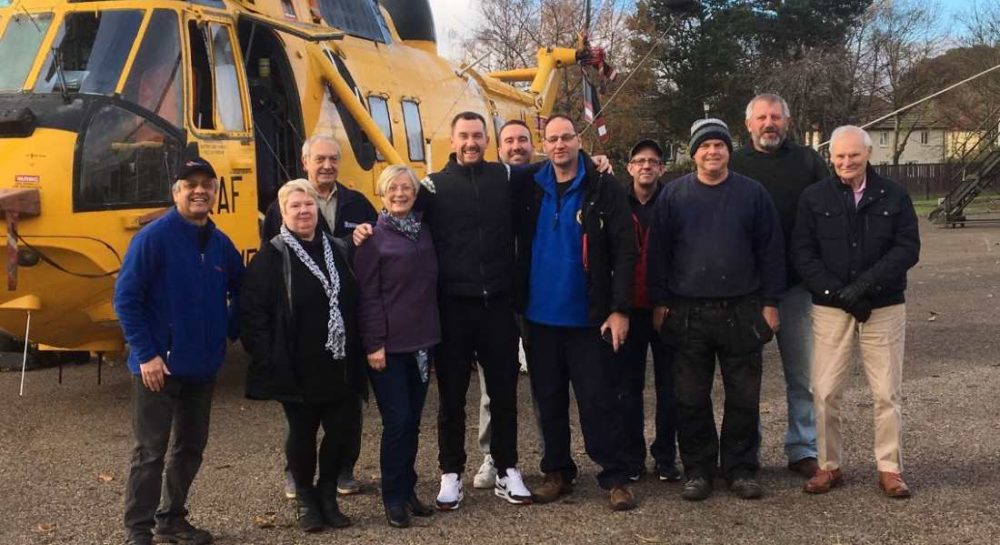 ONE OF THE LEADING stars of Emmerdale took the long road north at the weekend to help launch the Christmas festivities in Buckie.

Anthony Quinlan – who plays the role of Pete in the long running series – helped attract thousands to the Buckie Christmas Cracker on Saturday – before heading over to the other side of the county, where he paid a visit to Morayvia’s Kinloss base.

Anthony wanted to see for himself just why Morayvia’s science, technology and aviation attraction is growing such a massive reputation far beyond Moray’s boundaries.

“Anthony came along with his cousin Tommy for a ‘flying’ visit to Morayvia and we were all delighted to see them here,” Morayvia’s Mark Mair told insideMoray. He added: “They were here for the Buckie Christmas Cracker where he switched on the festive lights.

“Buckie has gone from strength to strength with volunteers and committee determined to create the best Christmas experience in the region – and we were delighted to send along our RIV fire engine and Canberra cockpit as added attractions on the day.”

Mr Quinlan was up early on Sunday morning and set off for Kinloss where he met several of the volunteers – and of course a few of the prize exhibits that has made Morayvia a must-see attraction in just a few years.

Mark said: “Our guests were given the full tour by Morayvia chief executive Stan Barber – including a detailed insight into the Sea King with former RAF SAR winchman Bob Pountney on hand to give them an even closer insight into the work this fantastic aircraft undertook.

“We also took the opportunity to show off our recent Moray Chamber of Commerce award for Community Tourism – which itself has given a massive boost to our volunteers.

“When we told Anthony about our plans, including our new tourism strapline “Bang the Drum for Moray”, he decided on the spot to make a short film clip that he is Tweeting to his army of followers!”

Morayvia will be reopening to the public next week when Santa’s Grotto will once again prove to be an unmissable attraction over the next month – keep an eye on the Morayvia Website for details.