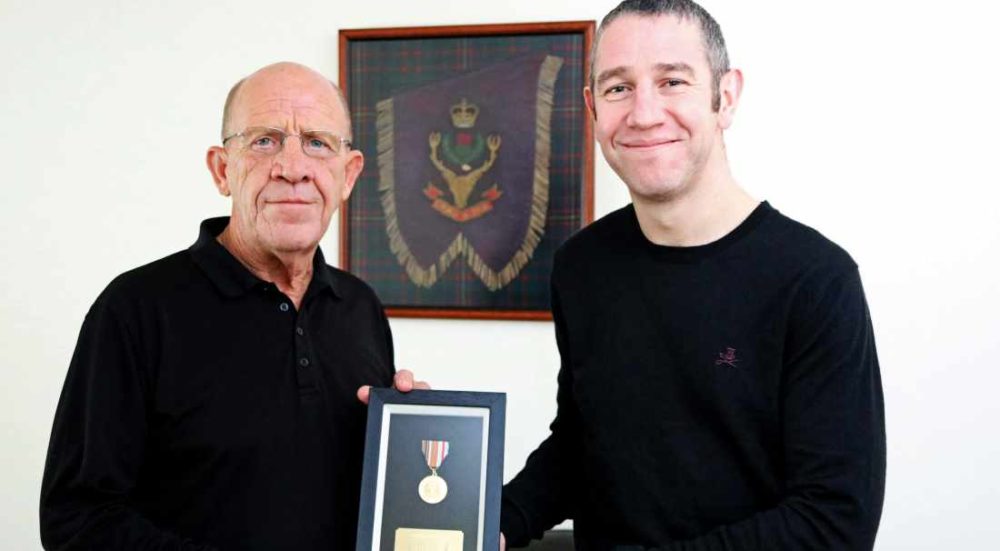 A MORAY MAN has been honoured by the military veterans’ charity Erskine as one of their recipients of a 100 Heroes for 100 Years medal.

A former Queens Own Highlander from Forres, Albert Duffus has raised almost £6000 for the charity in the last few years through organising a number of events in honour of his late son, Mark.

The 100 medals are being awarded by Erskine in this their centenary year – and after receiving his award by the Erskine Community Fundraiser for the North of Scotland, Michael Parks, Albert thanked everyone in Moray who has helped him in his work for the charity.

He said: “Since my son Mark’s passing in 2013 people have helped me raise £5,722.18 – and I would like to thank them all for supporting my fundraising events with their generous donations.

“It is an honour to have received one of the 100 medals given out to Erskine’s supporters.”

Mr Parkes praised Albert for his “amazing” work, adding: “As a way of thanking Albert, Erskine have awarded him with a 100 Heroes for 100 Years medal. This is part of the celebrations for the charity to mark its Centenary this year.

“The medals recognise organisations, supporters and volunteers that have gone above and beyond to raise vital funds for our veterans. Without local supporters like Albert, Erskine would not be able to continue to care for over 1000 veterans each year in their four homes in Scotland.”