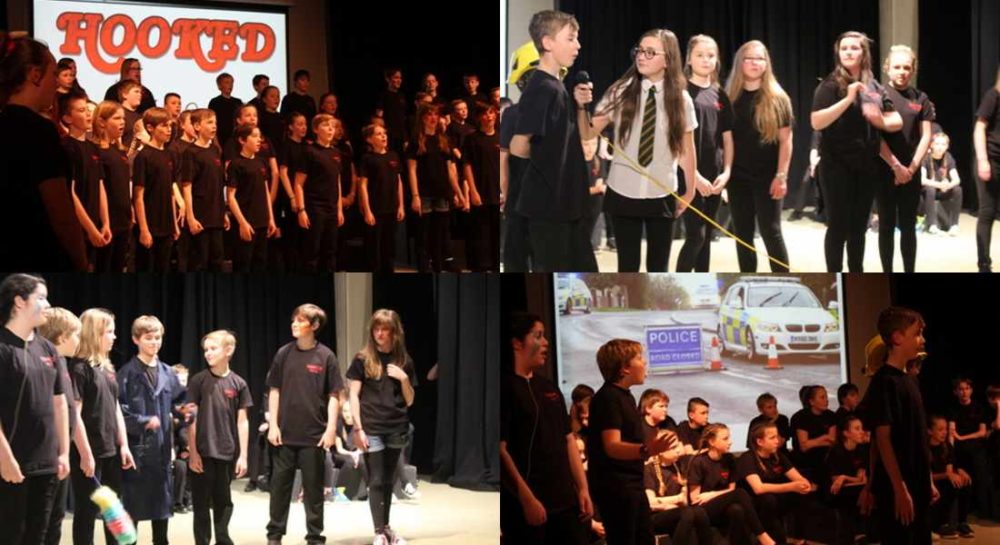 MORAY SCHOOL PUPILS brought the house down this week when they performed the drugs awareness musical ‘Hooked’ to an audience of pupils from three local primary schools.

The students from Milnes High School performed the musical created by Livewire Productions and developed in partnership with Scotland Against Drugs.

Their performance was seen by P7’s from Milne’s, Mosstodloch and Lhanbryde as well as family members.

Kelly Dawson, who is Milne’s High School library resource centre coordinator, said: “The pupils have been working tirelessly over the last few weeks to produce the performance.

“Partnership working has been the key to the success of this project. Six departments in the school have been delivering this interdisciplinary project – English, Music, PE, Art, PSE and the Library.

“This ensures that the principles of the drugs messages are delivered through dance, singing, acting, art, research and drugs workshops, thus allowing the pupils to experience the true meaning of Curriculum for Excellence.”

Hooked tells the story of Steve, who, after a night out, has an out of body experience where he meets his conscience, Dev and Connie. They proceed to show Steve how dangerous drugs can be, trying to influence the decisions he makes.

The acting is interspersed with dance routines and some catchy songs that deliver some hard-hitting messages about drug misuse.

Kelly added: “The pupils have also benefited from the inputs from our School Liaison Officer, PC Potter, to highlight the dangers of drug misuse on young people’s lives. The project has focused on the drugs most widely used by young people and the consequences that are associated with misuse.

“The pupils were allowed the chance to choose their area of performance earlier in the term and the groups were then given preparation time to allow the work to begin. The rehearsals have been well attended and are a credit to the S1s commitment to the project.

“Staff and pupil helpers have worked tirelessly to assist the S1s with the musical and without their input the show would not be able to go ahead.”