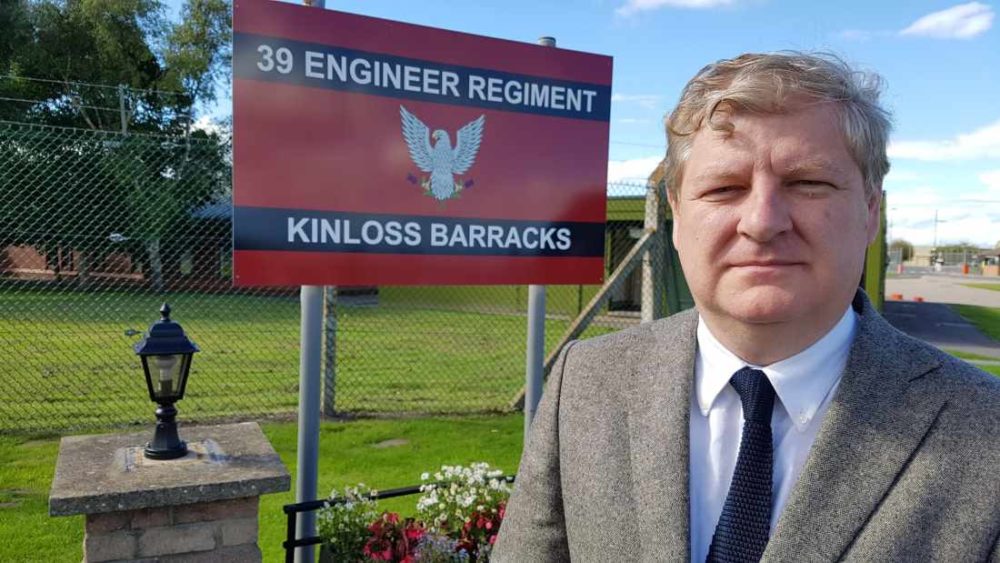 THE PRESENCE OF THE ARMY in Moray has been guaranteed ‘for the foreseeable future’ – putting an end to speculation of the future of Kinloss Barracks.

The announcement came in a statement in the House of Commons on Monday and ends fears for the future of the base, sparked earlier this year by claims from Moray MP Angus Robertson that the Ministry of Defence had placed Kinloss on a closure list.

However, following the statement from the Secretary of State for Defence, Mr Robertson insisted that there was a potential threat to Kinloss – while defence chiefs have said throughout the process that the study included all MoD land ownership in the UK.

While Kinloss has been spared, other Scottish bases will eventually be closed under the review – including Fort George, although that will not be concluded for at least ten years.

Last night Mr Robertson said: “The statement on base closures shows why we were right to be concerned in Scotland with the closure of eight defence sites announced by the Conservative Government.

“The fact that the Minister felt the need to specifically mention Kinloss shows that our joint efforts in Moray hit home, forcing the Government to specifically exclude Kinloss from their base closure plans. Nearby Fort George does not fare so well with a long slow decline now in prospect.

“The response to the potential threat to Kinloss by Moray Council, HIE, the Scottish Government and others, alongside Richard Lochhead MSP and myself shows how Moray can pull together when economic risks are identified and have a united front in the face of potential threats.

“It is obvious from both previous defence reviews and from the current process that we need to stay on our toes. Promises of consultation by the Ministry of Defence were reneged on and that caused us significant concern. Hopefully the UK Government will learn lessons from this process and the criticisms they have received but I am not holding my breath.”

However, regional Tory MSP Douglas Ross hit out at the MP for “whipping up rumours” over the future of the base, demanding an apology for what he called “unnecessary scaremongering”.

Mr Ross said: “This is great news for Kinloss and for Moray. People have understandably been worried, but the only person whipping up rumours was Angus Robertson – because while the UK Government was going through a proper process that’s delivered the right answer, he saw the chance for a few cheap headlines.

“Angus Robertson assured local people he had an impeccable source that said the Army were to be removed and the base closed. Local people were genuinely concerned and worried and a task force was set-up – this could all have been avoided but for the Moray MPs attempts to make political capital where there was none.

“Now we know it was entirely unnecessary scaremongering, he must now apologise. Setting aside the fact that a Scotland leaving the UK would have its proud military shredded, this was shoddy behaviour that shows complete contempt for our armed forces and local communities.”

Responding to the charges from Mr Ross, Angus Robertson told insideMoray this morning: “The uncertainty in this process was created by the UK Tory Government’s decision to slash its military footprint, including the announcement that eight sites in Scotland are to be closed.

“The facts are these – the MoD held a meeting with Moray Council to discuss alternative uses for Kinloss. The MoD promised a public consultation that did not occur. Sound military sources indicated to me that Kinloss was under consideration for closure.

“Had a decision been made to close Kinloss and we had made no effort to prevent that, despite knowing those facts, then that would have been irresponsible. The Conservatives have a short memory, as they seem to have forgotten the decision to scrap the Nimrods, which was made with no notice whatsoever and has since been roundly condemned .

“I make no apology for being extremely sceptical about the Tory’s approach to defence decisions and no apology for putting pressure on the Government to keep Kinloss Barracks in my Moray Constituency open.

“Organisations and individuals in Moray came together to argue the case for Kinloss and the fact that the Secretary of State had to specifically announce that Kinloss would remain open shows that the message from Moray got through loud and clear.”

Speaking on behalf of the Moray Economic Partnership, Councillor Stewart Cree last night welcomed the news that Kinloss was not under threat.

He said: “We are extremely pleased to see the Ministry of Defence has had the foresight to recognise both the military value and wider potential of their base at Kinloss Barracks.

“The 130 civilians employed at the base will be greatly relieved at this announcement, as will the men and women of 39 Engineer Regiment (Air Support), who are well integrated into our community.

“We will now seek further information from the Ministry of Defence as to their future plans for utilisation of this important base and also confirmation that the uncertainty of the past few months will not be revisited on our communities and economy for the foreseeable future.”

Councillor Cree added that the partnership looked forward to the resumption of “consultative conversations” with the MoD, which he added had been “abruptly halted whilst the footprint review was being drawn to a conclusion”.

Also welcoming the news was Richard Lochhead MSP, who said: “This is good news and a huge relief for the local community and Moray economy.

“There is absolutely no doubt that there was a big question mark hanging over the future of the barracks throughout the MoD’s review and that’s why the cross-party and multi-agency Moray Economic Partnership deserves credit for the successful campaign to save the army presence.”