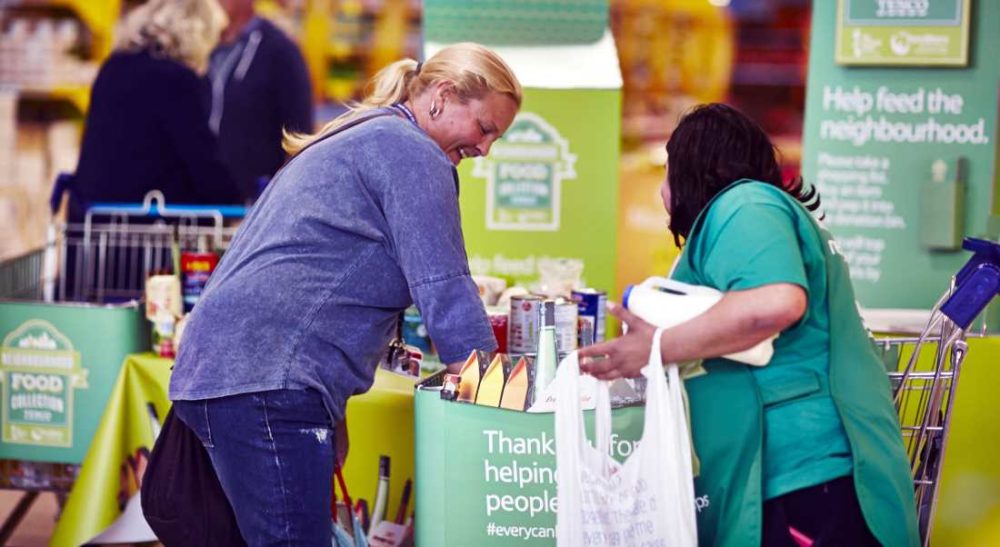 A THREE DAY drive this month by national store Tesco to provide a boost to the number of meals being donated to foodbanks has demonstrated the generous nature of people in Moray.

Shoppers were invited to donate food in their local Tesco store in Moray on the first three days of December for the benefit of local charities and people referred to foodbanks. The food collected in Moray helped contribute towards the estimated total of three million meals collected for the charities by all Tesco stores nationwide this month.

Tony McElroy, Tesco’s Head of Communications in Scotland said: “We’re thrilled with the huge number of food donations we’ve had in Moray , resulting in such an amazing number of meals to give to those in need this Christmas and beyond. It really demonstrates the generosity of the people of Moray. Thank you for once again supporting us, and making this collection so successful!”

The donations come at a vital time when The Trussell Trust and FareShare see an increase for their support.

David McAuley, Chief Executive of The Trussell Trust said: “Every year Trussell Trust foodbanks see a significant seasonal spike in the volume of people needing emergency food during the lead up to Christmas; last December we saw a 45% increase in the number of parcels provided compared to the average for the rest of the year.

“The staggering generosity of Tesco customers, store colleagues and volunteers, means foodbanks in Moray will be able to provide vital food and support to local people who are struggling during what could be our busiest December yet. Thank you for your support – your generosity will help stop hunger in Moray this Christmas.”

Lindsay Boswell, CEO of FareShare, said: “What we’re seeing, right across the country, is an increased demand from the organisations we work with for more food.

“They have more mouths to feed. There has been a 26% increase in the number of charities signing up to FareShare in the last year, so without the Neighbourhood Food Collection we simply couldn’t meet the growing demand. Every single item of food donated will make a difference, so thank you to everyone involved.”

The nationwide collection builds on work done throughout the year to help support people in need such as the permanent food bank collection points in over 600 stores and the Community Food Connection which diverts any surplus food from Tesco stores to local groups at the end of each day.