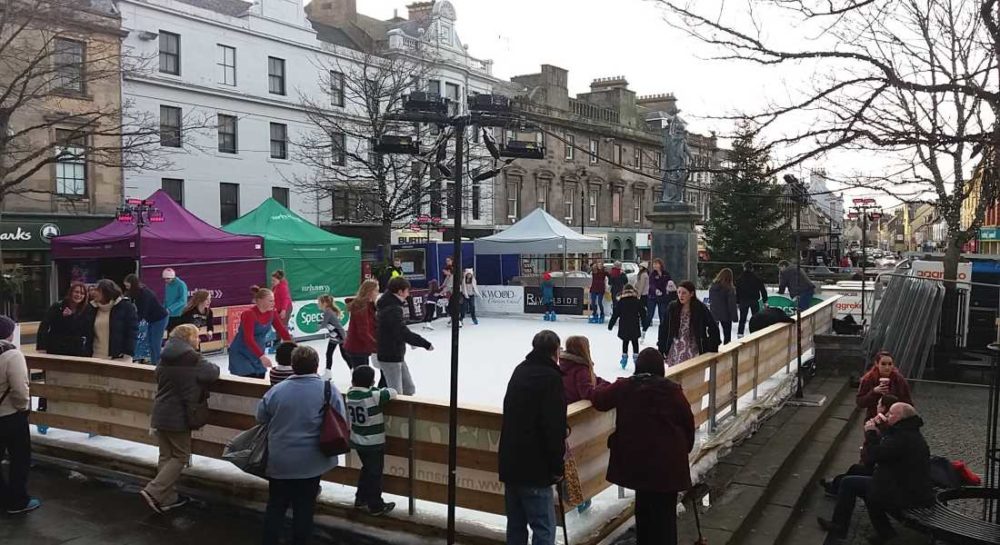 MARRIAGE PROPOSALS AND international visitors are just two of the unexpected bonuses being gleaned from the first ever Elgin Ice Festival.

Organisers responsible for the introduction of the temporary ice rink to the centre of the town are expressing their delight that despite the many difficulties of introducing such a complex project the Moray public have rallied in their hundreds.

The challenges of introducing the festival over Christmas and New Year have been many – but all overcome, including changeable weather conditions, with Jon Behari telling insideMoray: “We are delighted that our Ice Festival has been supported by many patrons from around Moray and beyond.

“Tourists from Australia and Asia have also skated for the first time on our outdoor ice rink – and a marriage proposal has also been made, accepted and celebrated on the ice!

“We have had local ice hockey and figure skaters on the rink for sessions and lessons as well as very popular ‘inclusive friendly’ access sessions throughout the opening weeks of the festival – and despite the poor weather delivered by Storm Beatrice and Storm Conor, attendance has been very high throughout.”

Usually quite evenings after the shops close in Elgin have been replaced by a buzzing town centre as people return again and again to skate – proving the expectations that the festival would encourage more people into the town to be correct.

Skating will continue on the rink until Saturday, January 7 – when an ‘Ice Theatre’ event will officially close the rink at 7.30pm.

While not compulsory, pre-booking for sessions is advised and can be made online at http://www.elginicefestival.com/tickets – experienced and first-time skaters are welcome. The box office is also open at the rink itself each day from 10.30am.