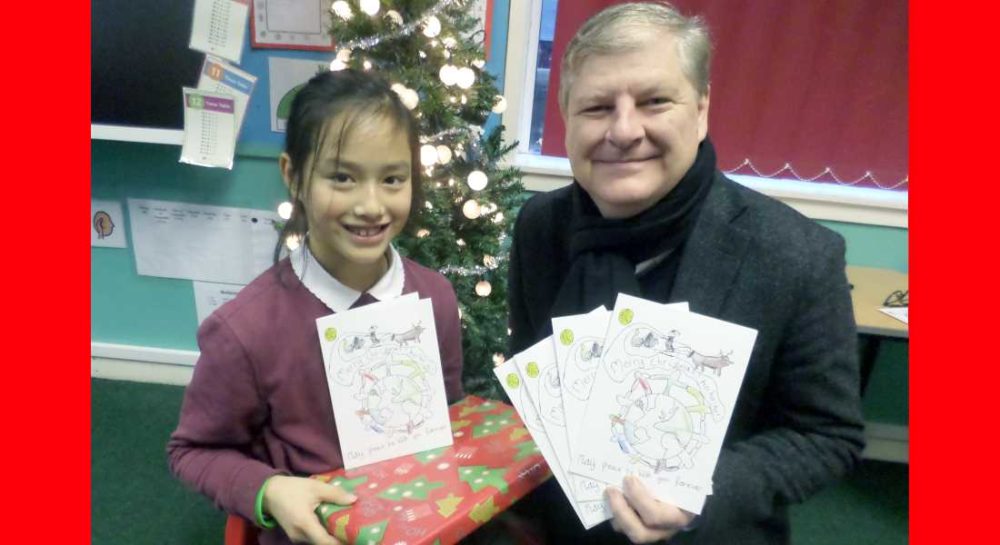 A SURPRISE VISIT at a Keith primary school this week brought a smile to the face of talented nine-year-old Gloria Johnston.

The visit was from Moray’s MP Angus Robertson – and the surprise was the news, announced to an unsuspecting classroom, that Gloria’s design for the Moray Parliamentary Christmas card had won the annual competition organised by Mr Robertson and his Holyrood colleague Richard Lochhead MSP.

Theme for the 2016 card was ‘welcoming’ with all proceeds from the card, which this year has been sponsored by AES Solar, Baxters, Springfield, The Forsyth Foundation and Robertson, will be donated to CLAN Cancer.

After presenting Gloria with her prize – a set of art materials – Mr Robertson said: “Gloria’s design featured people holding hands around the world, which was a great representation of the competition theme of ‘welcoming’. Gloria is a very deserving winner!

“This year we are using our parliamentary Christmas Card to highlight the fantastic work of CLAN Cancer Support, who are themselves a hugely ‘welcoming’ organisation, providing vital support to people diagnosed with cancer, as well as their family and friends.”

Richard Lochhead added: “Once again we had dozens and dozens of fantastic entries from across Moray to our annual Christmas Card Competition. I am delighted for Gloria who illustrated the ‘welcoming’ theme really well.

“A big thank you also goes to the competition sponsors, their support and the support of other companies over the years has helped ensure that various local charities have benefitted from the competition.

“CLAN Cancer Support are a very deserving charity and I am delighted that we are able to provide some support to them through the competition.”