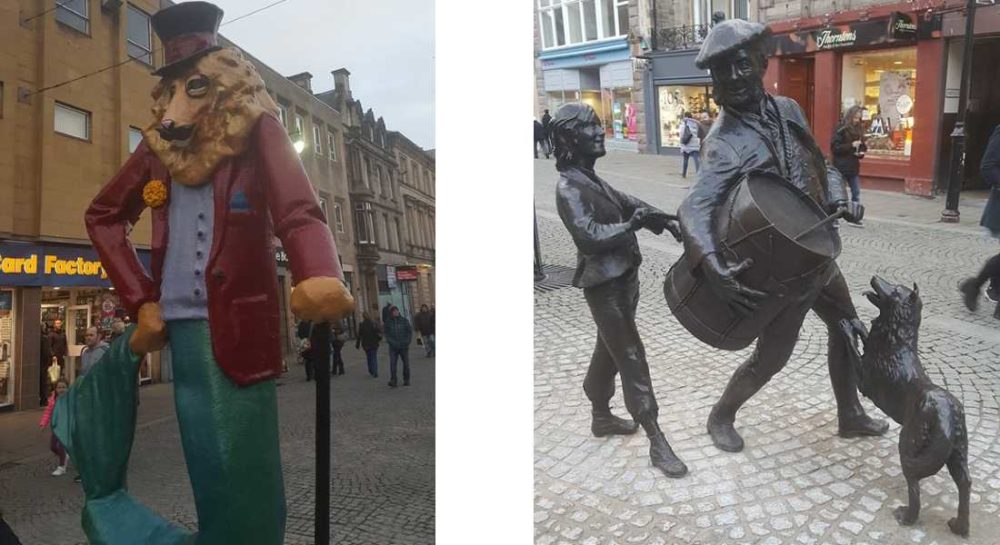 THE UNVEILING OF THREE sculptures commissioned by the Castle to Cathedral initiative in Elgin went without a hitch on Saturday – but not without controversy for one of the works.

The works were commissioned to depict Elgin’s heritage, part of a number of investments aimed at increasing the attraction of Elgin for visitors.

While they were being hailed as a “fantastic attraction” by the chairman of the Castle to Cathedral to Cashmere project, Jim Royan, one Moray councillor was scathing in his comments over one of the sculptures – the ‘Dandy Lion’ created by Vik Quckly.

Fochabers/Lhanbryde councillor Sean Morton said of the work: “The odd looking lion with a fish tail is not the only statue in this project but it has shocked many of us. It’s a waste – an intellectual and cultural vomit in technicolor.”

Councillor Morton was not alone in his distaste for the work, which has drawn a storm of derision on Social Media in recent days – many claiming that rather than attracting more visitors to the town it will attract entirely the wrong kind of media attention.

“There should never have been cuts from Westminster or cuts from Holyrood – but this is not how our money should be spent when we’re all hurting so much. This isn’t my priority and it isn’t yours.

“I’m sorry – I’d have voted against this if I ever had the chance. This is what happens when people we’ve never seen make all the decisions – let’s get this sorted.”

However, Jim Royan insisted that all three sculptures were already making an impact: “People want to see them and there is something for everybody in them. There are the classical ones and the more unconventional, which I think is important.

“It has taken a long time to get here but it’s been worthwhile – the investment is for future generations, so that visitors will find the centre of Elgin a much more interesting place.”