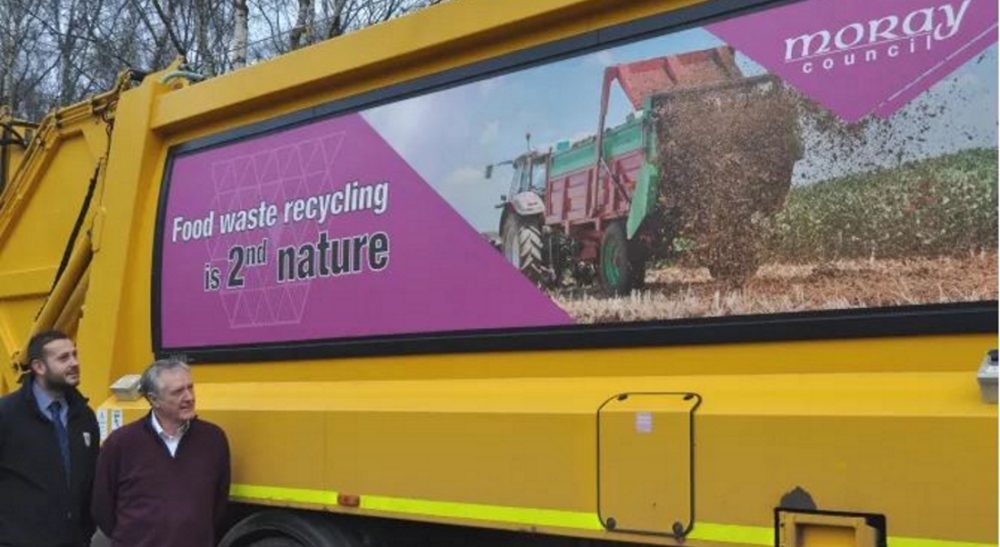 NOT ENOUGH FOOD waste is being collected for recycling by Moray Council bin lorries – prompting an appeal for more awareness that the service is available.

To help drive home the message council waste and recycling vehicles are fitted with side panels urging householders to be aware of the financial and environmental costs of food waste going to landfill sites.

With the second best record of recycling amongst Scotland’s 32 local councils Moray has a proud record – but not where it comes to food waste, with the authority estimating that 5000tonnes finds its way to the Dallachy landfill site each year that should have been recycled. The cost to the region is a prohibitive one – £400,000 per annum in landfill taxation.

He said: “Last year Moray residents helped us achieve a very impressive overall recycling rate of 57.4% and that rose to more than 61% in the first six months of this year.

“But around 34% of the contents of an average green bin is food waste which is very disappointing and is costing the council a fortune in landfill tax to the Scottish Government.

“The vast majority of homes in Moray are provided with a brown bin and that is where food waste should go so that it can be recycled.

“With the festive period coming up, I would urge everyone to make a New Year resolution to dispose of their food waste by putting it in the proper bin.”

Fitting the panels to the council’s waste collection vehicles has been completed ahead of the festive period when there is traditionally a spike in the amount of food waste being generated by households.

Householders are reminded that food waste should be deposited in the brown recycling bin along with garden waste.

Food waste, along with garden waste, is sent to a recycling facility in Aberdeenshire where it is turned into an organic fertiliser, 70% of which is used by north-east farmers. The remainder is used in horticulture.