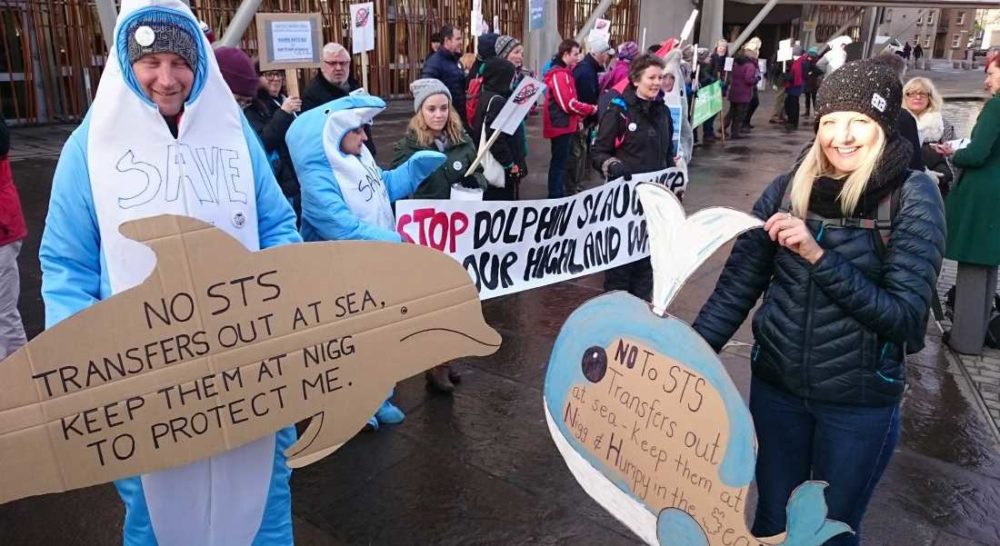 THE SCOTTISH GOVERNMENT must get off the fence and rule out ship-to-ship oil transfers in the environmentally-sensitive Moray Firth.

That is the view being expressed by the Scottish Greens after they lent their support to a rally on the issue outside the Holyrood parliament on Thursday.

It was exactly a year ago when regional Green MSP, John Finnie, launched the ‘Save our Dolphins’ petition against the plans of the Cromarty Firth Port Authority – it went on to gather just short of 4000 signatures and was one of several raised throughout Moray and the Highlands.

A three-year campaign by Green MSPs to halt similar plans in the Firth of Forth ended in victory when Forth Ports dropped their proposal in 2008.

Moray Greens convenor James MacKessack-Leitch said: “It’s high time this risky and unnecessary proposal was put to bed – communities around the Moray Firth having been fighting the proposals for well over a year while the Scottish Government continues to ignore the issue, and local concerns.

“Yet similar proposals in the Firth of Forth were decisively thrown out in 2008 – without swift action here, it will not be a surprise to see continued growing local opposition to the current Scottish Governments Central Belt bias.”

The protest in Edinburgh was organised by campaign group Cromarty Rising which draws many of its members from Moray, one of whom told insideMoray: “It was disappointing that the First Minister suggested we switch our protest to the Scotland Office.

“I would have thought that this being a major issue affecting one of the most treasured natural environments in Scotland would have attracted more of what we were asking for – the support of the Scottish Government.”

Scottish Greens environment spokesperson, Mark Ruskell MSP, commented: “The precious environment and the livelihoods of coastal communities remain at risk as the Scottish Government continues to sit on the fence on this vital issue.

“While the decision to licence the application ultimately rests with the Maritime and Coastguard Agency, Scottish Ministers have clear legal powers to protect the environment, and the environmental importance of the Moray Firth couldn’t be clearer. They need to put their foot down, and show whose side they are on.

“It’s great to see public opposition growing all the time, and I’m hopeful that we can repeat our success of 2008 and kill off this daft plan. The alternative is we open the door to similar risky activities near coastal communities all around Scotland.”