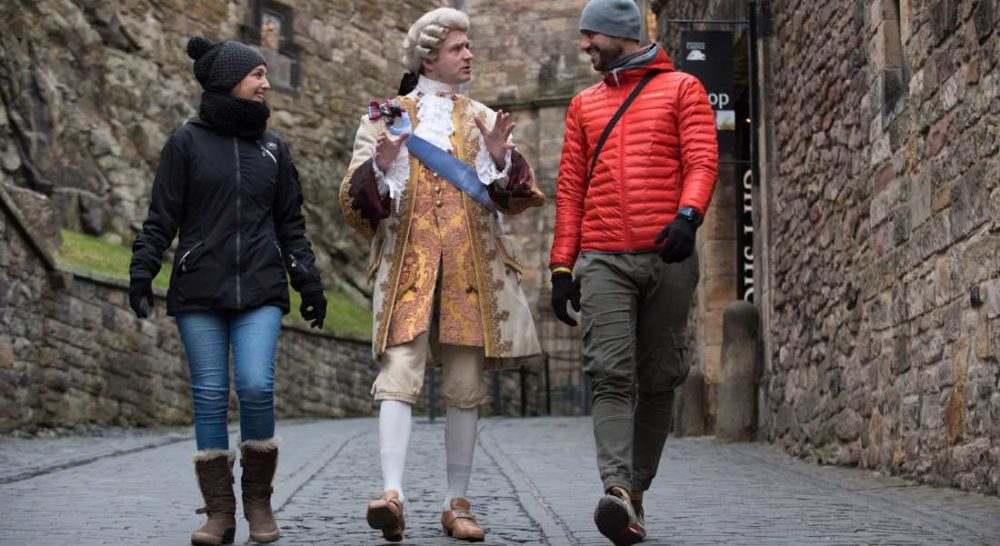 MORAY WILL BE included in a major new campaign that seeks to capitalise on the renewed world-wide appeal of Bonnie Prince Charlie.

Interest in the Prince and his Jacobite followers has grown thanks to the success of Diana Gabaldon’s ‘Outlander’ books and the subsequent television series.

Now National Museums Scotland, Historic Environment Scotland, Royal Collection Trust and The National Trust for Scotland have joined forces to create a trail of 25 properties and attractions throughout the country whose history is intertwined with that period of Scottish history.

The announcement comes today, which is the 229th anniversary of Charlie’s death.

Through a combination of online videos, media promotions and blogger activity, the £40,000 match-funding from VisitScotland’s Growth Fund will allow the campaign to reach a digital audience across the UK, while also tying in with the 2017 Year of History, Heritage and Archaeology.

Dressed as ‘The Young Pretender’, actor Mark Kydd helped announce the campaign at Edinburgh Castle – one of the properties on the trail and a building Charlie was famously unable to capture during his lifetime. A key part of the campaign takes place from June 23 to November 12, when the National Museum of Scotland in Edinburgh will host the biggest exhibition on the Jacobites in more than 70 years.

This will include, among numerous other items, Charlie’s shield, sword and his travelling canteen.

Moray’s part in the trail will be Brodie Castle, where the 19th Laird, Alexander Brodie, resided during the Jacobite uprising – he supported the Duke of Cumberland during the campaign against Prince Charlie’s forces.

A new website has been created for the campaign. The trail can be downloaded from the site now, with a range of further resources to be added in the coming months.

Malcolm Roughead, Chief Executive of VisitScotland, said of the initiative: “Scotland’s history and culture is one the top reasons for visiting Scotland and 2017 offers huge opportunities for the tourism industry and collaboration across sectors.

“Bonnie Prince Charlie is one of Scotland’s most enduring historical figures and we are delighted, through the VisitScotland Growth Fund, to support this collaborative campaign that will help visitors follow in his footsteps.”

David Forsyth, lead curator of the National Museum of Scotland’s exhibition, Bonnie Prince Charlie and the Jacobites, said: “Our exhibition will present the best material there is – real objects and contemporary accounts and depictions – to present the truth of a story which is even more layered, complex and dramatic than the many fictional and romantic interpretations which exist in popular culture.

“Through this partnership, we are delighted to extend the exciting invitation to people to not only come here and see those real objects and hear that real story but also to travel the country and visit the places where many of these momentous events actually happened.”