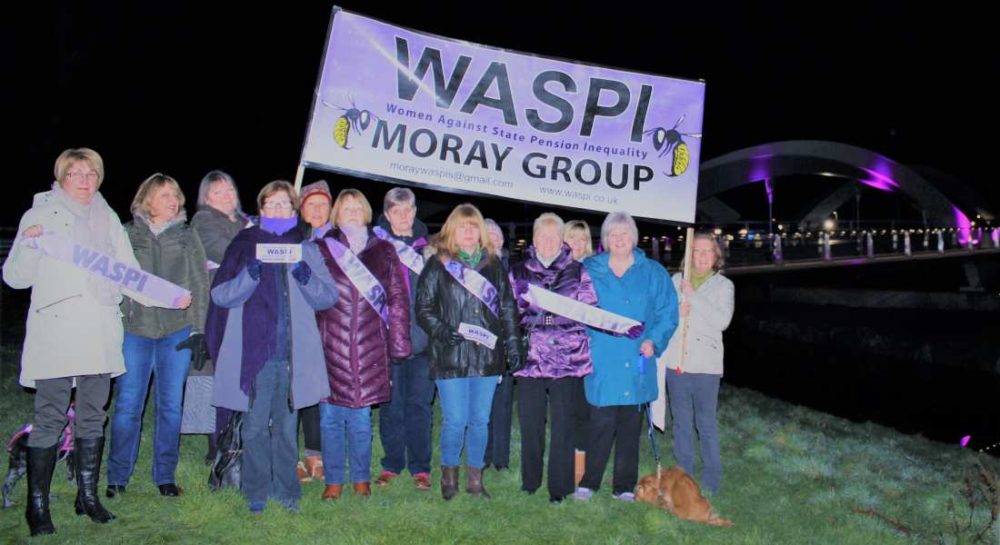 A MORAY LANDMARK has been relit in Purple in a show of support for local women and thousands more around the UK campaigning for a fair deal in their state pensions.

Last year the Moray Council demonstrated support for the WASPI campaign, sending a letter of support to the UK Government. Now they have agreed to lighting the Landshut Bridge in Elgin in support of the ‘Paint the Town Purple’ campaign around the UK.

The WASPI movement was formed in protest at a government decision that has been deemed by thousands to be grossly unfair to women born in the 1950s.

While most of the pensioners and future pensioners affected have no gripe with the concept of equalising the pension age for men and women, the manner in which it has been imposed has left many in financial difficulty as they had little time to prepare for the major changes imposed on them.

At the weekend several members of the Moray WASPI Supporters Group gathered at the Landshut Bridge to mark their participation in the latest effort to raise awareness of their plight. Sheila Forbes, Co-ordinator of the local group, said: “We were delighted that the Council agreed to light the Bridge.

“We hope that this will help increase awareness of the issue for 1950s women living in Moray – we have been out and about putting up posters throughout the region, but having such a focal point lit in our colours definitely has more impact.

“Some of us are preparing to attend a demonstration in London on March 8, to coincide with Budget Day and International Women’s Day. By being at the House of Commons on such a high-profile day, we hope to get national coverage that will let the Government know we mean business, and we are not going away.”

WASPI successfully raised £100,000 through Crowdfunding to finance a legal challenge and have been able to instruct a prestigious firm of Lawyers to act on their behalf. More information on the campaign can be accessed through the WASPI web page.