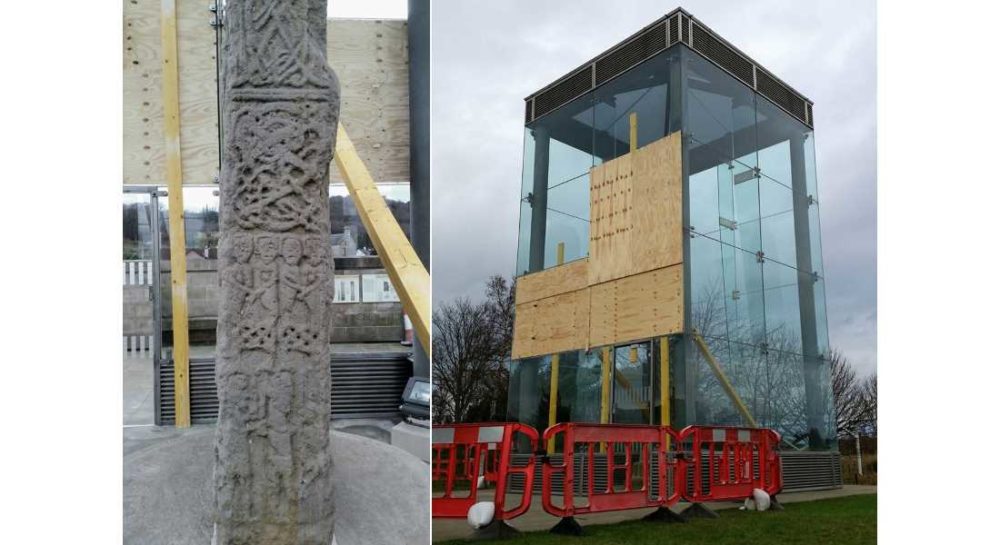 A NEW APPEAL has been issued by police in Moray who are continuing their investigations into an act of vandalism that caused around £10,000 worth of damage to a Forres landmark.

The glass casing enclosing the Sueno’s Stone in Forres was attacked over the festive holiday by vandals who were thought to have planned their action against 9th Century Pictish artefact.

Sueno’s Stone is the largest surviving Pictish stone of its type standing over 21ft tall and bearing the distinctive interwoven vine symbols. The stone was encased in armoured glass in the early 1990s to prevent it suffering further erosion.

It is believed that the damage to the case enacted last Wednesday was pre-planned with the rocks used to cause the damage taken to the site by those responsible.

Investigating is Constable Jamie Walker, who said: “This was mindless vandalism to an important local cultural landmark – it has rightly angered the local community. We are asking that anyone who may have information regarding this incident come forward to speak to us.”

Local councillor George Alexander said that he hoped those responsible for the damage would be found – but admitted that was a difficult job for police: “It won’t be easy – this was done when nobody else was around and there can’t be much to go on.”

Wooden boards have been put in place as a temporary measure with Historic Environment Scotland admitting that it may take some time to replace the three shattered glass panels.