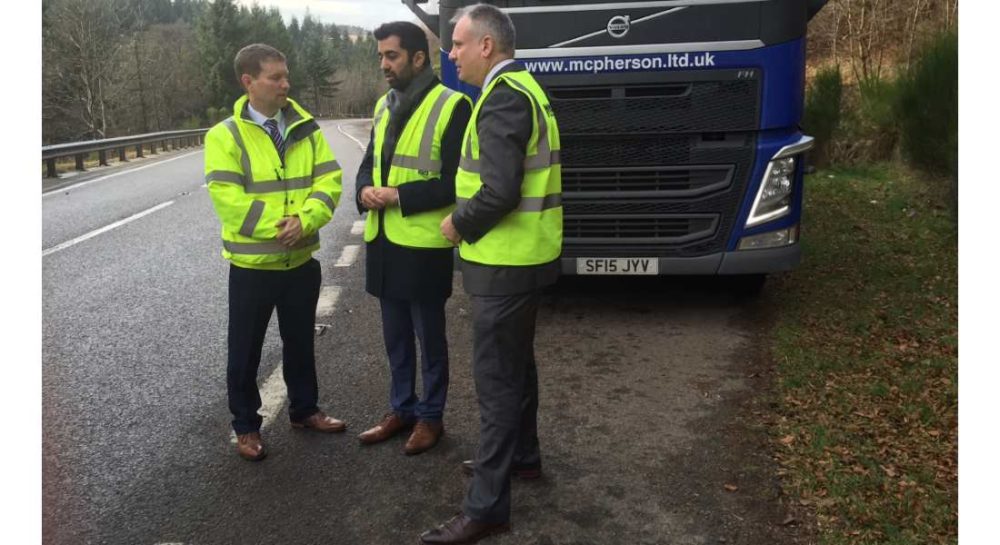 SCOTLAND’S TRANSPORT MINISTER Humza Yousaf was in Moray on Wednesday where he joined local MSP Richard Lochhead to discuss the need for improvements to the A95.

Mr Yousaf also met with the director of haulage firm McPherson’s, Martin Brown, who highlighted some of the more problematic sections of the road, which is of particular importance to the whisky industry in the region.

McPherson’s recently highlighted issues with the roads being too narrow in places to handle the heavy vehicles used by haulage firms, with their company having to pay out around £1000 each week in repairs to broken wing mirrors.

Mr Yousaf travelled along a section of the A95 in a McPherson’s HGV, noting first-hand the difficulties their drivers experience on some of the worst sections of the road in Moray.

Following the meeting Mr Lochhead said: “I welcome the Transport Minister taking the time to experience what it is like to drive an HGV on the narrowest section of what I call Scotland’s whisky highway.

“The Minister has given a commitment to discuss the need for road improvements on the A95 with Transport Scotland and to explore what can be done both in the short term as well as other long term improvements.

“The Scottish Government has invested hugely in the A9 and the A96, both of which will benefit Moray massively but the role of the A95 is also hugely important, not only to the whisky industry but for other sectors such as forestry and tourism, as well as for local residents.”

Mr Yousaf said it was an “interesting experience” getting a real-life view from the cab, adding: “The drivers are very experienced – but that said, we should go back to Edinburgh to see where we can make interventions.

“I am not promising the earth at a time of financial constraints – but there is a broad spectrum of small and larger interventions that can be made.  The whisky industry is worth £5billion nationally and half of that comes from Speyside, so it is of national importance.”