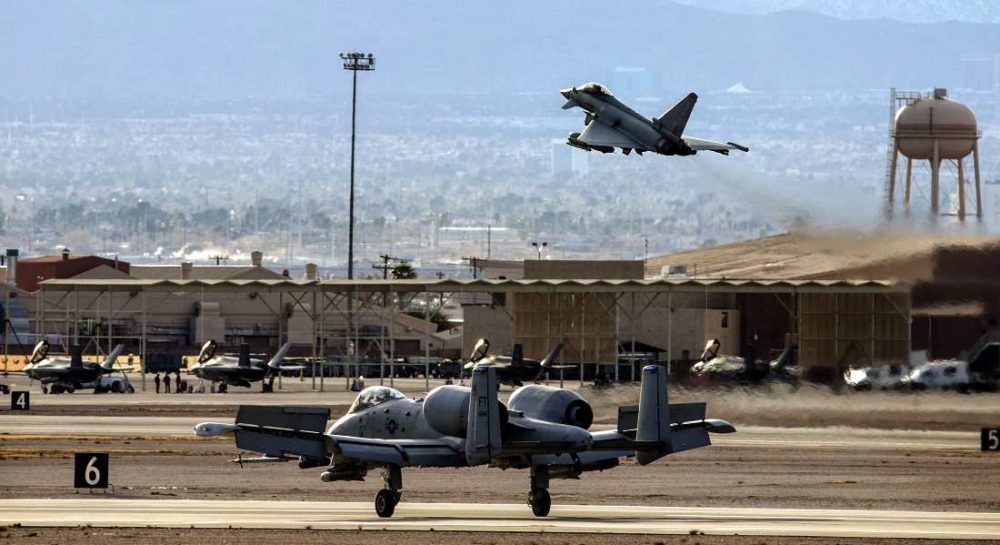 TYPHOONS FROM LOSSIEMOUTH have been settling into their role this week as part of an international ‘friendly’ force taking on ‘aggressors’ in air-to-air combat over the Nevada desert.

Since the start of the week 6 Squadron from the Moray base have been flying from Nellis Air Base in the United States as an integral part of the Red Flag exercise, involving some of the best pilots in the world.

The live element takes place over the US Air Force’s premier military training area in Nevada – over 15,000 square miles of airspace and 2.9million acres of land – an impossible scale to achieve in Europe.

Taking part alongside the Typhoons are US Air Force F-22 Raptors and F-35A Lightnings. This continues the evolving integration of RAF operations with 5th Generation aircraft ahead of the introduction of the F-35B into the RAF’s combat air inventory in 2018.

“While our day job at Lossiemouth is protecting UK airspace through Quick Reaction Alert, here in Nevada the majority of what we’re doing is air-to-air fighting and some strike missions. This means we’ll be flying two waves of six aircraft every day.

“One of the benefits of this exercise is the threat replication; we can simulate fighting our way into a target area through a high-threat environment, dropping precision munitions on specific targets and then fighting our way back out again.

“It’s a privilege to deploy here with 6 Squadron and to represent the Royal Air Force, the UK and Scotland in particular.”

Meanwhile a deal has been struck between the new President Trump administration in the US and the UK Government over closer co-operation in maritime air patrols over the North Atlantic.

UK minister for defence Harriett Baldwin and US counterpart Bob Work signed a declaration on Wednesday committing their governments to a stronger relationship on defence issues. RAF Lossiemouth will be home for the new Poseidon P-8A MPA aircraft within two years, with RAF crews already training and working with US Navy crews and their aircraft.

Ms Baldwin said: “This declaration is further evidence of how our two countries continue to cooperate and build mutual security, particularly in the North Atlantic region. Backed by a rising defence budget and a £178billion equipment plan, the P-8A programme will provide us with enhanced surveillance capabilities.”

As the UK awaits the arrival of the first of nine Poseidon P-8A’s at Lossiemouth, visits from US Navy MPA’s are increasingly likely to fill the gap – several of them crewed by RAF personnel.

Bob Work said of the deal: “This cooperation agreement ensures and deepens our maritime control capabilities. Together the US and UK will continue to deter regional threats and maintain a robust military posture.”