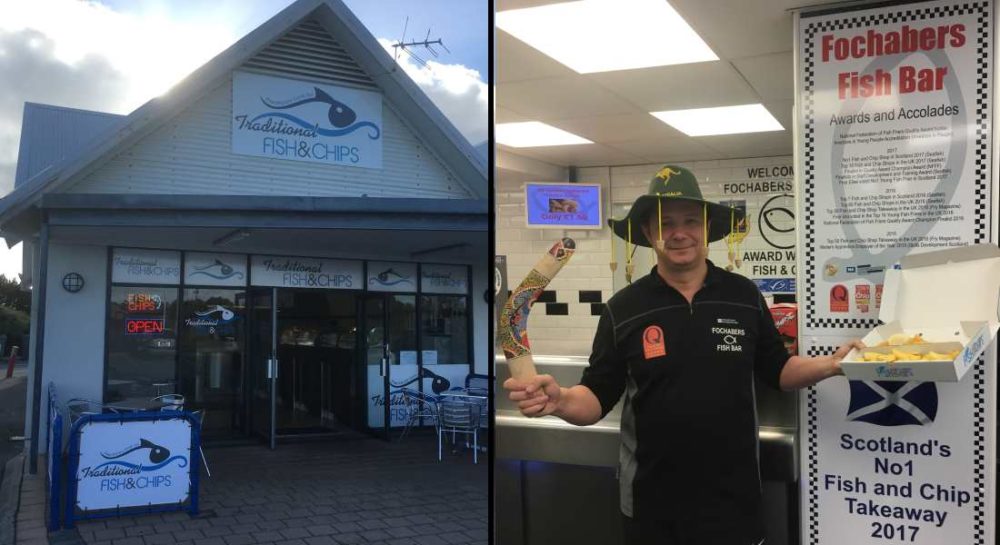 THE OWNER OF a multi-award winning Moray Fish and Chip is set to fly out to Australia – to share his expertise with a couple who are trying to establish a similar business there.

The online publicity the Fochabers Fish Bar received as a result of their award-winning exploits and customer satisfaction attracted the attention of Pete and Ann Speight, owners of ‘The Chippy’ (formally the London Chippy) in Port Kennedy, Western Australia.

After contacting Fochabers Fish Bar owner Darren Boothroyd by email five weeks ago, the Scottish ex-pats invited him on an all-expenses paid trip to Australia in exchange for some guidance on how to create the finest fish and chips available.

The couple moved to Australia after Pete’s oil and gas sector contract came to an end – he saw an opportunity to run his own fish and chip shop and went for it. However, it was soon apparent the shop had lost a deal of local interest and the couple had a hard job to rekindle its reputation in the community near Perth.

So they sent out an SOS to Darren – who agreed to fly out to Australia next week. He said: “It’s an honour to be asked by Pete and Ann to go to Australia and help a business intending to grow and develop.

“Fish and chips is a dish which has a growing reputation worldwide and the need for top shops all across the world is great for our industry.

When we became Scotland’s number one fish and chip takeaway at the National Fish and Chip Award 2017, myself and the Fochabers Fish Bar’s team’s ambition is to continue to grow and spread the work of fish and chips across Scotland and now worldwide.

“The Fochabers team has got to this position through training and developing and to help someone else is something I’m only happy to undertake.”