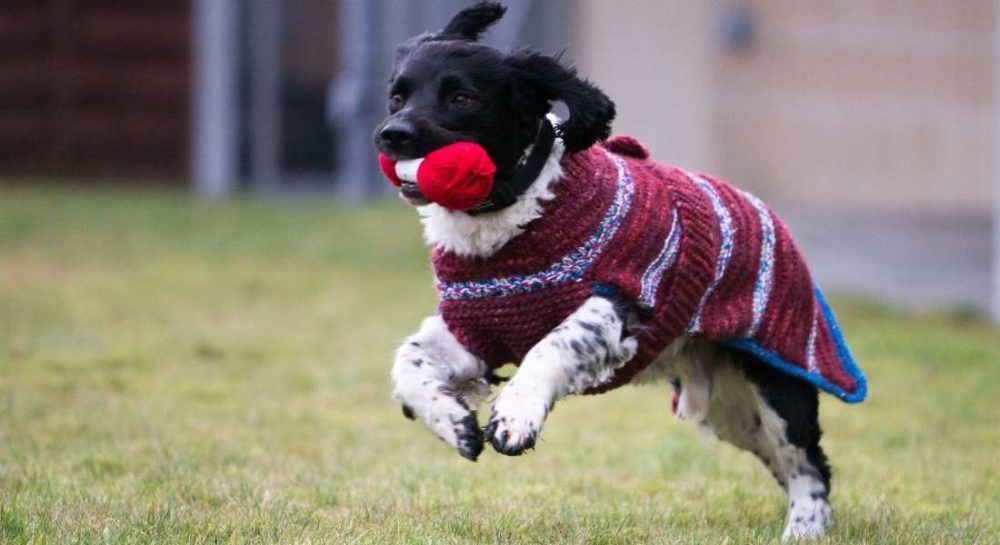 HOMELESS DOGS THROUGHOUT Scotland are being discriminated against because of the colour of their fur – prompting an army of Scottish Women’s Institute (SWI) knitters, including several in Moray, to rush to their aid.

‘Black Dog Syndrome’ is apparently a very real problem as dark-coated dogs are overlooked by potential new owners if favour of those that are light-coloured.

This results in dogs with black or dark fur remaining in the care of The Scottish Society for the Prevention of Cruelty to Animals (Scottish SPCA) for longer periods of time.

After learning about the discrimination being faced by the homeless hounds, SWI approached the Scottish SPCA offering their members’ services to knit ‘coats of many colours.’ It is hoped the technicoloured coats – created as part of the celebrations to mark 100 years of the SWI – will make dark-coloured dogs more attractive to potential re-homers.

Sybil Stuart, chair of Moray and Nairn Federation SWI – and a member of Fochabers and District Institute – has responded to the call by knitting a dog jacket for the Scottish SPCA I rescue and rehoming centre at Inverness. She encourages fellow members to get behind the cause.

Mrs Stuart said: “The SWI has got involved in supporting the Scottish SPCA because of our reputation for craft work and knitting and this is something we will certainly be promoting in Moray and Nairn.

“If, by knitting these jackets, we can help find a deserving and loving home for all dogs that come into the care of the SWI, then that will be a very positive result.”

SWI national chair is Christine Hutton, who added: “We are encouraging our members to pick up their knitting needles and help a homeless hound. It’s a mission to help end Black Dog Syndrome, a phenomenon whereby potential new owners overlook black dogs in favour of their lighter-coated counterparts.

“It’s sad to think of black dogs being less appealing simply because of the colour of their coat, but we hope that our knitters will be able to kit them out in coats of many colours and improve the chances of them being rehomed more quickly.”

Scottish SPCA Superintendent Sharon Comrie explained the very real problem: “This syndrome really does affect the adoption of animals in our care and, through no fault of their own, black dogs are almost always the last to find new homes.

“It’s a really creative idea to knit coloured jackets to show these dogs off to their best advantage.

“Knowing that the SWI has members in every part of Scotland, many of whom are extremely dextrous when it comes to traditional crafts, means that we’ll hopefully be able to help animals in the nine rescue and rehoming centres we operate in Scotland.”