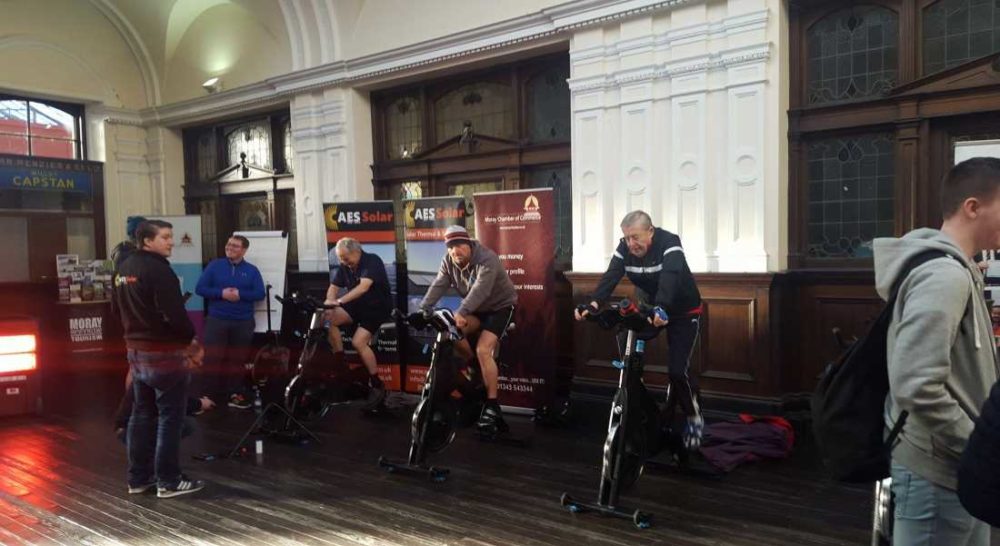 A STATIC CYCLING event hosted by the Moray Chamber of Commerce at the Old Railway Station in Elgin has raised £3000 – with more pledges yet to be counted.

The business group teamed up with Anytime Fitness and MFR Cash for Kids with the aim of raising funds for sick, disabled and disadvantaged children.

Eight spin bikes were set up with sponsored teams keeping them going with the aim of covering the distance between Elgin and its twin town in Bavaria, Landshut. The winning team – who cycled over 236 miles – was Anytime Fitness with the Moray Chamber of Commerce in second place and Gordon and Macphail in third.

A spokeswoman said: “MFR presenter Ginno Conti cycled a marathon (26.2 miles) and the day had a great atmosphere which was added to by the MFR and Cash for Kids teams there supporting our cyclists.

“Also on the day, which also had a Workplace Wellbeing theme, there were stalls from Highland Office Equipment with their adjustable standing desks, Manna Juice, Moray Sports Centre and NHS Healthy Working Lives to encourage businesses to become more aware of their wellbeing whilst at work.

“Moray Chamber of Commerce would like to thank all of their members, sponsors and friends and family of those who took part. The money raised will be a great help to the vulnerable children living in Moray at the Highlands.”