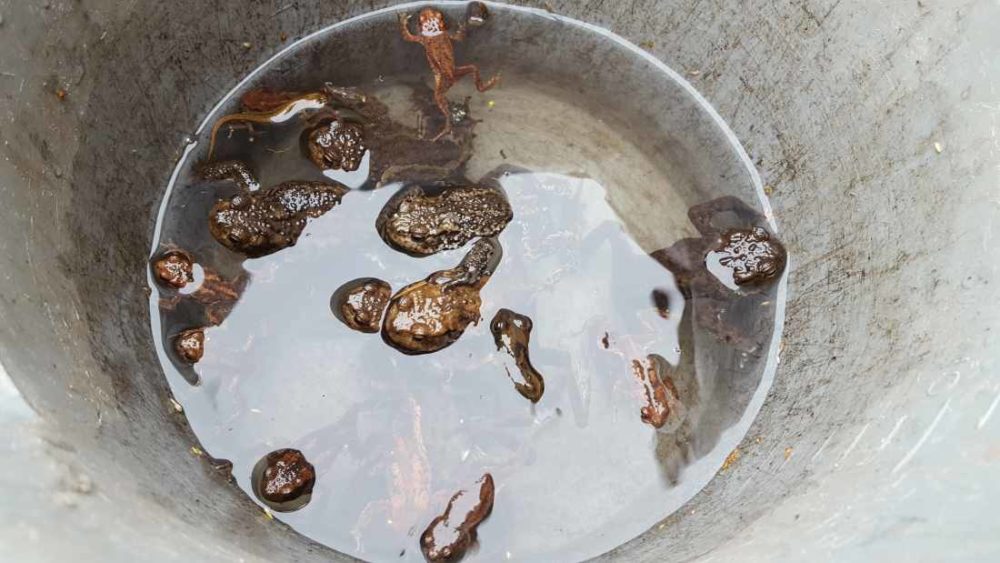 KISS A FROG and find a Prince may not quite be the message from two Forres residents who are urging local people to talk up some of their local residents – Moray’s frogs, toads and newts.

However, Steve Hull and Alan Tissiman insist that helping our perhaps not so cute neighbours will certainly give out a feel-good factor.

Steve spends time each year rescuing amphibians that have fallen down drains and cannot climb out again – and both men are concerned about the impact a new housing development in Forres may have.

Alan explained: “Steve has shown that many amphibians perish in badly sited drains in our area – and we are concerned that a new planned development by Dallas Dhu distillery may have a very serious impact on the population.

“This is a great place for amphibians (at the moment) because there is plenty of suitable habitat such as ponds nearby.

Steve explained that meant they used hedges rather than walls and fences – but amphibians need to be able to move around to get to their breeding grounds.

He continued: “Walls and fences can imprison populations – gardens can be fantastic for our wildlife but only if they are planned properly and developers are obliged to take nature into account. It’s not rocket science and it need not cost much.”

Alan and Steve are urging local people who care about wildlife to email the Council at localdevelopmentplan@moray.gov.uk and make their views known. Details about the Dallas Dhu development can be found at: www.moray.gov.uk/currentconsultations.