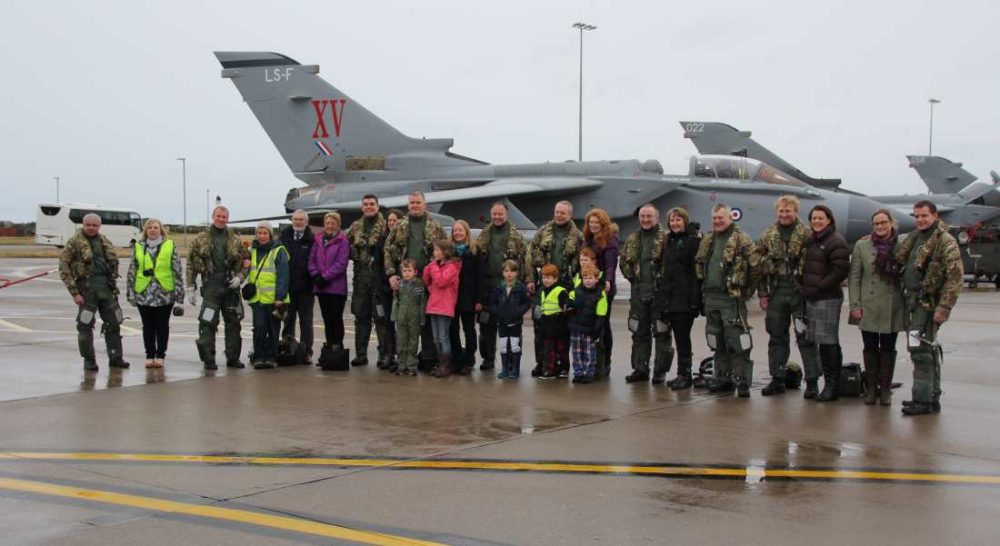 THE TORNADO FLIGHT LINE at RAF Lossiemouth has seen many emotional aircraft returns over the years, most notably as squadrons have arrived back from war zones.

On Friday, however, it was all very different – it was the end of an era, the close of an unbroken period stretching back 24 years during which the RAF base and the wider local community became almost ‘married’ to an aircraft – the Tornado.

Five crews from XV(R) Squadron led by Wing Commander Paul Froome put on a bit of a show for the local population – hundreds of whom lined the base perimeter to catch the final display. Even a dull, rainy day could not spoil the excitement of the Tornado undertaking a tribute flypast and mock airfield attack.

Then it was on the ground where waiting families were on hand to welcome their flyers home – with, for several, the last mission completed in careers that have been outlasted only by the Tornado itself!

An emotional Wing Commander Froome told insideMoray: “It was exciting, proud, sad – and emotional, a whole collection of feelings from today. Lossiemouth is incredibly special, we’ve loved being here and it will be very sad for us to have to leave.

“It has it all – the countryside, location and community makes it just fabulous and having spent some time in London, no comparison. For me now, once I’ve disbanded the squadron on March 31 and have all the aircraft away – that will be me and off on a staff tour somewhere. I can only dream of being back at Lossiemouth at some time in the future.”

As the aircraft approached the base the flyers could not fail to see the hundreds who had turned out to pay homage, one more time, to an iconic aircraft that has been part of their lives for so long.

Paul, who has spent a total of nine years of his service at Lossiemouth, added: “I never expected that there would be such a turnout for today – it was a show of the pride and respect and love that this community has for the Tornado.

“I know from when we started the disbandment process the feedback we’ve had from has just been tremendous.”

Waiting at the steps of the aircraft to welcome home his crews for one final time was the Station CO, Group Captain Paul Godfrey, who said: “All of our feelings are very mixed of course, sadness that we will no longer see the Tornado flying from Scotland – but also excitement, as we know this town and the whole of Moray is on the verge of a whole new chapter in its aviation history.

“A new Typhoon squadron will take the place of XV(R) – and of course beyond that we have the P-8A’s and the very large investment that is massive for the whole of Moray.

“So yes, while it is a sad day in many ways we have a great deal to look forward to – another new chapter for RAF Lossiemouth and the people who live here.”

Paul confirmed to insideMoray that while no decision has been taken on the future of an aircraft taking on the markings of the historical ‘MacRoberts Reply’, first carried for an XV Squadron bomber in the second world war when flying Stirling bombers.

The mantle was carried for a final time by the Tornado flown by Wing Commander Froome.  While the squadron is no more from the end of this month, for the time being at least, the Station Commander said that there was a keen awareness of the tradition and talks on its future would take place.