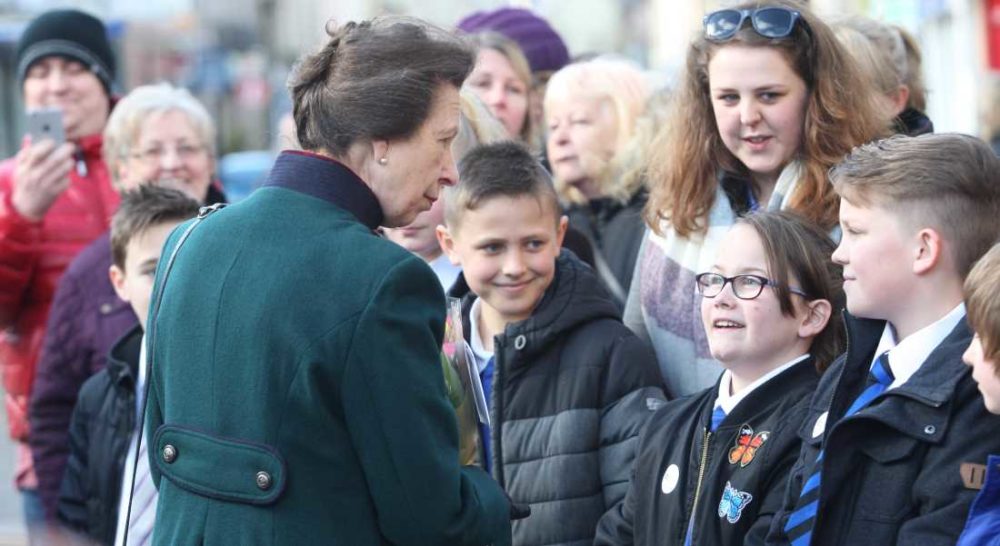 THE PRINCESS ROYAL has given a royal seal of approval to the Castle to Cathedral to Cashmere heritage experience in Elgin.

Princess Anne dropped in at St Giles Church on Tuesday to officially open to initiative after taking a short tour of the sculptures on Elgin Plainstones.

She was accompanied by the man who has taken the initiative forward, Jim Royan, who is also a Vice Lord-Lieutenant of Moray. Princess Anne then spent some time speaking to invited guests at St Giles before unveiling a commemorative plaque.

There was also excitement for customers and staff at Johnstons of Elgin, where Princess Anne marked the firms 220th anniversary with a visit to their Mill.  There the Princess Royal met with staff involved in all processes of production and design, some of whom have worked with the family business for more than 20 years.

It was the second major Moray engagement undertaken by the Princess Royal, having called in at the Elgin Youth Café on Monday. There she inspected the new kitchen facilities in the Inkwell, the result of a £300,000 investment that aims to increase the cooking skills of secondary school pupils in the region.

It is the third time the Café has entertained a Royal guest with both Prince Charles and Prince Edward having visited previously.

Before departing the Princess Royal told staff and volunteers: “I must congratulate you on everything you have achieved so far and hope that you continue to be hear in years to come. It is a real investment in the young people who will continue to come here in the future as well as those who have come before.”

On Sunday evening the Princess Royal attended a church service at Gordonstoun School, where her children Zara and Peter had been pupils.