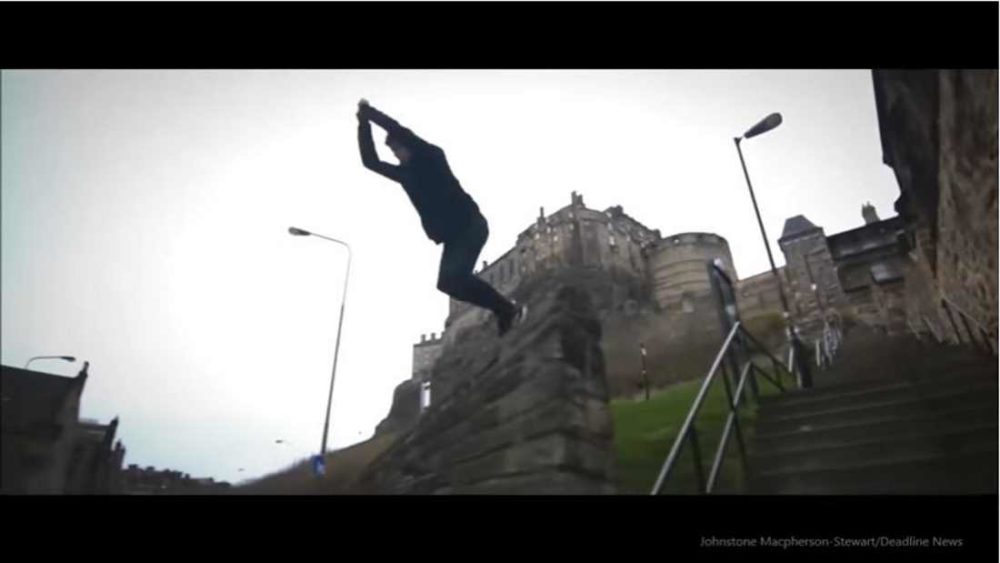 A VIDEO THAT is causing a major online sensation has been produced by a trainee filmmaker who cut his teeth in his native Forres.

Former Forres Academy and Dyke Primary pupil Johnstone Macpherson-Stewart shot and produced a video of his fellow Parkour enthusiast Robbie Griffith, 16, on the streets of Edinburgh – emulating a famous scene from the original ‘Trainspotting’ movie.

Johnstone’s film shows Robbie emulating the ‘street running’ scene from the cult movie, demonstrating his amazing Parkour skills as he runs, jumps and somersaults through the Edinburgh city centre landmarks made famous in the movie.

When the short film appeared online it was an immediate sensation – hitting around half a million views in the first day – and last night had reached over 750,000 views on Robbie’s Facebook page.

Robbie teamed up with Johnstone, 20 and currently studying film at the Royal Conservatoire of Scotland in Glasgow, as the pair practiced their Parkour skills at a purpose-built facility in Coatbridge.

Johnstone said that Robbie was already making quite a name for himself as a ‘world class’ Parkour athlete, adding that the Edinburgh moves were not particularly difficult for an athlete with his skills.

He added: “He can do a lot more than that but the idea was to feature Edinburgh and recreate the classic Trainspotting scene using Parkour.

“There are better places to do Parkour but this spotlighted the city and that has added to people’s interest.”

Of his own connection with Parkour he said: “As a kid, I was doing it naturally by climbing on walls and vaulting gates. Parkour was just building on that. It is more about what the mind thinks is possible than the body.”

Johnstone was noted himself for his Parkour exploits around Forres – but he is an equally talented filmmaker, producing the film ‘Winter Free Running’  through Elgin and Forres with his friend Harry Hurst.

He also produced a film on Orienteering when he was just 14-years-old called ‘Forest Jump’.