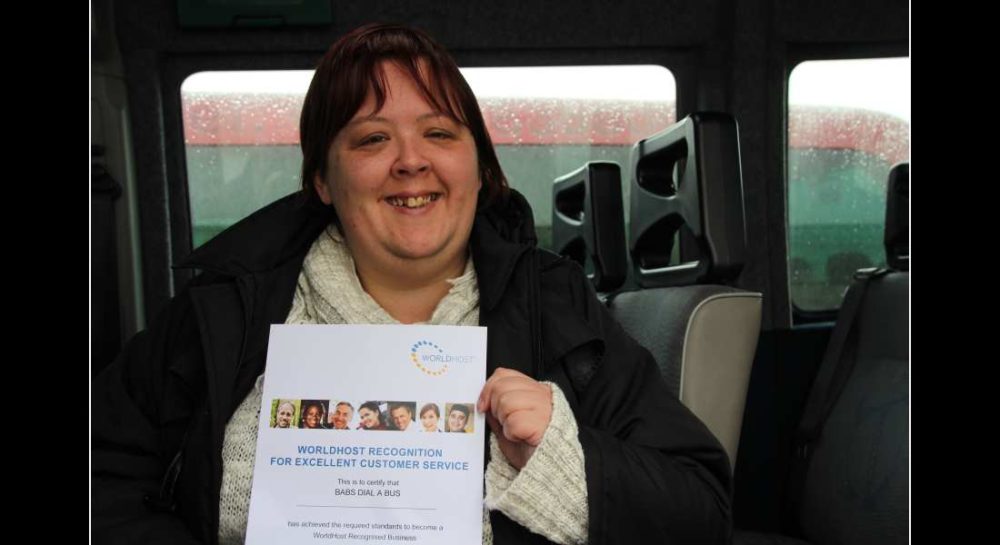 A MORAY COMMUNITY bus group have become the first in their town to gain the coveted WorldHost status for customer service.

Buckie-based BABS provides a service to disabled and elderly in and around the town, as well as providing social outings throughout the summer months.

With a high level of interaction with the public, the group, which was formed in 2000 by former bus driver John Parsons, decided to sharpen up their skills in dealing with the public.

Now the group have been awarded WorldHost status, having trained at least 50% of their front-line staff to meet the standards required.

Leah Rossvall explained: “We had around half of our volunteers attending the WorldHost course, which was run through the Highland Training Academy and held at the Town House in Buckie. At the end of that they took a test that covered the basics of customer service. We learned a lot of good practice on dealing with customers both over the telephone and face to face.

“One of our drivers was also present at the course along with one of our passenger assistants – they all said how much they enjoyed the day and are keen to exercise the new skills they gained.

“There are not many organisations like ours who have such a high level of customer interaction, certainly not in Buckie although I’m aware there is in other parts of Moray. We are though the first Third-Sector group in Buckie who have gained WorldHost status.

“We would very much encourage others to follow our lead and do something similar to what has happened in Forres where the town gained WorldHost status – I’m working with local civic leaders to encourage other businesses to get on board this scheme.”

For more information on BABS services visit them online.