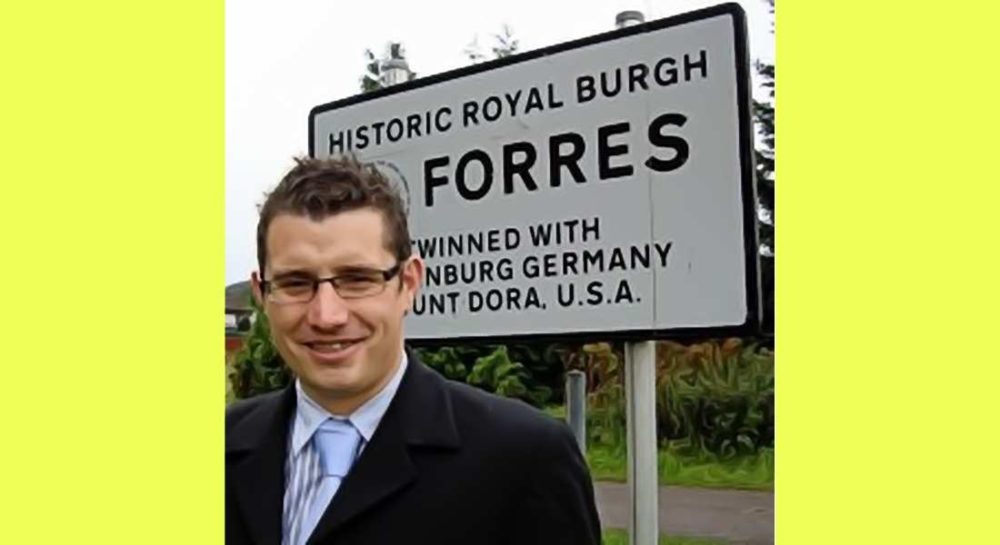 All individual candidates or political groups contesting the forthcoming local council elections in Moray are invited to state their case through the pages of our community news site – contact for submissions is editor@insidemoray.news. Here we have views of Aaron McLean, SNP candidate for Forres. I HAVE LIVE IN FORRES my whole life, having grown up in Thornhill and now living down in Pilmuir with my fiancee, daughter and have another child due in the summer.

I have been a councillor for the past five years but have previously worked with a local plumbing company and until recently worked at Tesco, where I’d been for almost 20 years, as well as with the council.

I used to play a lot of football but am now reduced to spectating at Forres Mechanics where you can usually hear me shouting in the stand! My dad has been involved with the Cans for over 40 years so I think it’s fair to say they’ve been a big part of my life. I try to play as much golf as I can and still turned out a couple of times last year for the cricket team.

During my time as a councillor I have been heavily involved in introducing the Fit Life scheme for our leisure services which has been a great success in raising usage and revenue in our leisure facilities. I have also been involved in progressing a Trust for our facilities as I believe it will best protect them so they are still there in the future.

My daughter starts school in the summer so I am passionate about making sure they provide all our children with the opportunities to progress in life. There is also a revolution coming in childcare with the doubling of free nursery hours. I will be working hard to make sure this is delivered in Moray as I know how important it has been for my daughter.

As I said earlier, I was raised in a council house in Thornhill but until recently that was the last social housing built in Forres. It has been great to see council houses being built again thanks to funding from Scottish Government and the Moray Council and I want to see more being built in the next 5 years. Working with the Scottish government to deliver this should be a priority for any councillor being elected and it would certainly be one of mine.

Finally, I have already worked hard with local groups to protect our bus routes from closure. I have proposed looking at setting up a council bus company so we are not at the mercy of private companies. The council currently runs a route from Garmouth to Elgin that actually makes the council money, so if we can replicate that elsewhere we can serve our communities with a valuable service.

These are all local issues that deserve a strong local voice and I hope I am given the chance to be that again in May.

And it has nothing whatsoever to do with any referendums!