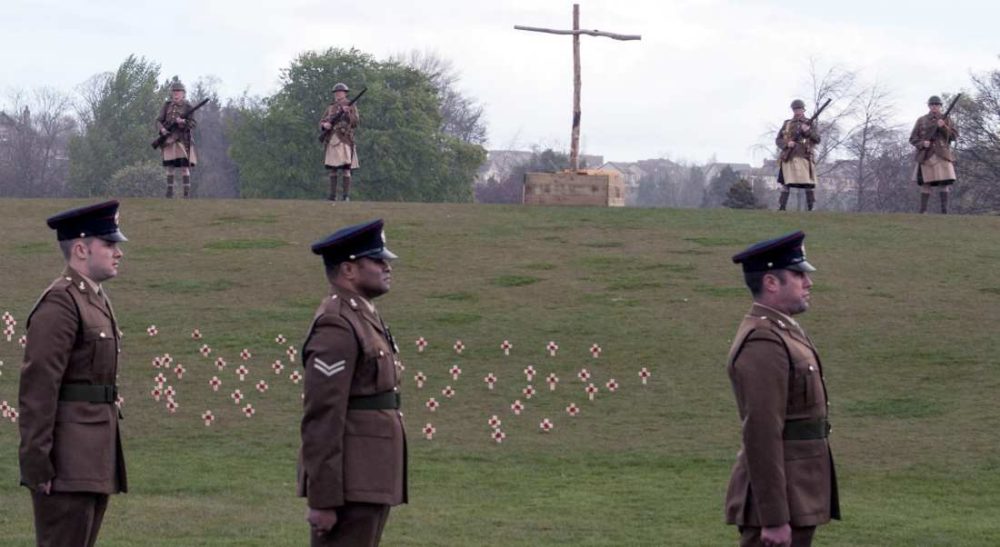 HUNDREDS GATHERED IN the rain at Elgin’s Cooper Park on Friday to join in a tribute to those from Moray who lost their lives in the Battle of Arras.

There were 250 local men killed in the first world war battle for control of the French city between April and May 1917 – the largest loss of life from the region in any single battle.

Children representing all of Moray’s schools placed wooden crosses in the turf – one for each of those who lost their lives – while four men dressed in WW1 uniform appeared from a cloud of smoke, representing the thousands to marched into battle one hundred years earlier.

Personnel from Kinloss Barracks and RAF Lossiemouth formed the heart of the tribute while a Typhoon flew overhead at 11am.

Kinloss Barracks chaplain Seoras MacKenzie told those attending: “Each of the 250 men we are remembering matter in their own right.”

Watched by military veterans the Military Wives Choirs of Kinloss and Lossiemouth performed songs that were familiar to the soldiers of the period and many since.

Attending the tribute was regional MSP Douglas Ross, who said: “It was an excellent commemorative event which included the military currently based in Moray, as well as informing those of us who attended about the history of Moray soldiers who lost their lives in the battle of Arras.

“The ceremony also acknowledged the future these soldiers fought for as school pupils from across Moray planted crosses in a very poignant mark of respect.

“I’m grateful to everyone involved for organising this event which allowed Moray to recognise the sacrifices made by local people in one of the bloodiest battles of the great war.”

The Battle of Arras was one of the major British-led offences in the conflict, one that saw 159,000 casualties on the Allied side alone – 46,000 of those were Scots.