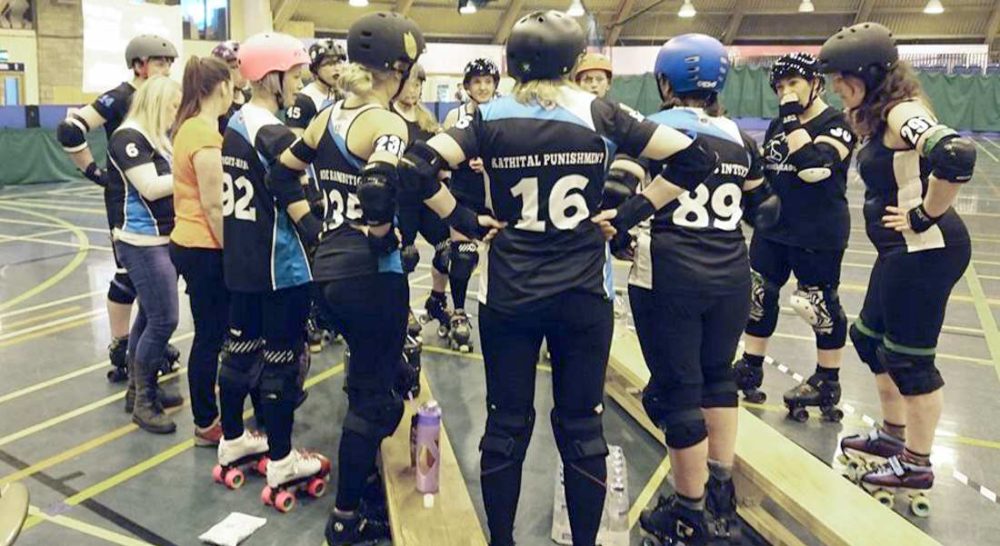 ONE OF THE FASTEST growing contact sports in the country has arrived in Moray this week with the first clash for local club Helgin Roller Derby.

Helgin recorded an opening victory over Perth opponents Fair City Rollers in what was a tense first round of what they hope will be an undefeated season.

Roller Derby is a fast-paced and full contact sport between teams of five on roller skates – each team has a ‘Jammer’, who can be identified by the star on their helmet. The Jammer’s objective is to battle their way through and lap the opposing teams ‘Blockers’ – who will seek to hinder the Jammer by hitting them with their shoulders, hips and rears.

Helgin had been training for months to get themselves ‘bout ready’ for their first outing in the Bell Sports Centre in Perth. From the off it was neck and neck, full of nervous energy and, ultimately, came down to a nail-biting finish with Helgin running out victors by 256 points to 251. Club captain Melanie Newbould said: “It was a brilliant day, something we have been working towards for the last two years. We are incredibly thankful to Inverness Roller Derby and Granite City Roller Derby for their continued support as well as lending us extra players to ensure a full roster for our first game.

“We look forward to further games in the not too distant future – with a full roster from Helgin.”

Melanie – aka ‘Melicious Intent’ – said that atmosphere at their first game was “amazing” and produced a comradery and team spirt that surpassed all expectations.

For Helgin, best blocker went to Caitlin Duguid (aka Maple Grief) with best jammer going to Kirsten Bryceland (aka Blonde Rambition) while the most valuable player award was Melanie herself.

Melanie added: “Overall our first bout was a huge success – as a team, we are now looking forward to continuing training at the Elgin Community Centre – and hope that when the Moray Sports Centre is built we can organise a rematch.”

Find out more about the Helgin Roller Derby squad on Facebook.