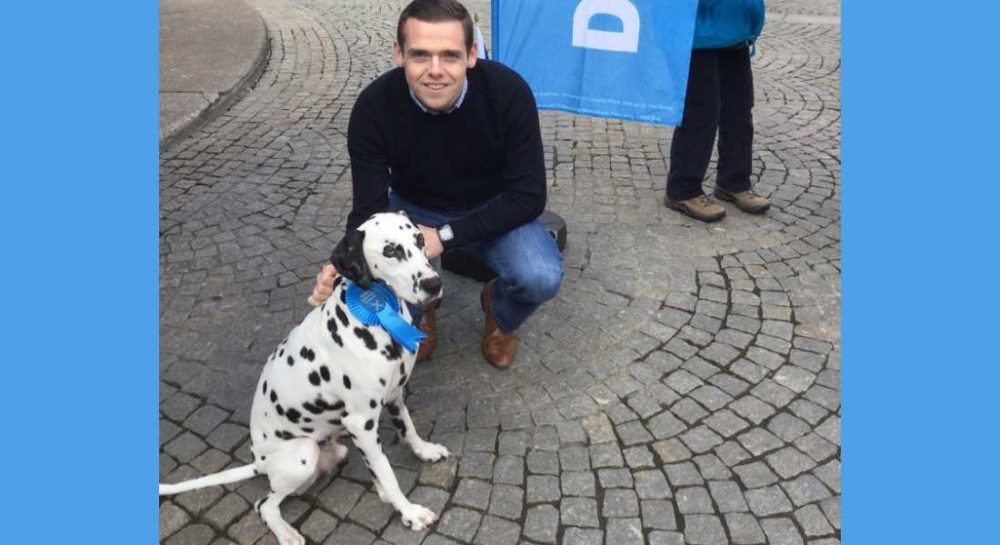 AS HIS SOON to be former colleagues in Moray Council seek the votes they need for re-election, Douglas Ross MSP is calling on his constituents, friends and animal lovers to help in a very different poll.

The Moray-based MSP is currently canvassing for his spotty canine buddy ‘Murphy’ – who is seeking the title of Holyrood Dog of the Year!

And if you think he is barking up the wrong tree – then just have a look at the Dalmation’s winning profile, because there is no doubt that Murphy is in a league of his own.

“He can knock the spots off the opposition,” said his Scottish Conservative MSP owner – who got a little more serious when he explained: “As well as being a much loved pet, Murphy is a loyal and friendly companion and has been through a lot in his short life, so winning the title would be extra-special for him and for Krystle and I.”

The pair are among several dogs owned by MSPs who are taking part in the first ever Holyrood Dog of the Year competition, organised by the Kennel Club and Dogs Trust, the same organisations which run the Westminster Dog of the Year. Politicians and their dogs are showcasing their political and canine clout as they battle it out to see who will be the dog that collars the title of Scotland’s most ‘pawfect’ political pooch.

The event, also helps to raise awareness of the issues affecting man’s best friend as well as shining a light on the unique relationships between MSPs and their dogs. In his entry form, Murphy, who is five-years-old, is described as happy, playful, friendly, cuddly and determined by his owners.

But it has not all been fun and games for the black and white leggy bouncing ball of fun who is living with a terminal illness, having been diagnosed in January 2015 with Granulomatous Meningoencephalitis (an inflammatory disease of the central nervous system) with a poor prognosis – he has already had MRI scans and chemotherapy type treatments.

However, a small dose of steroids and regular check-ups at the vets keep him active and enjoying life.

Douglas said: “Two years on and Murphy is still going strong and living every doggy moment to the full, although we have to limit his biscuit intake as he plays on the sympathy vote. The local vets in Forres as well as specialists in Stirling have done their best for Murphy.

“And while ultimately the diagnosis isn’t positive, they have got him back to a very strong place at the moment. Hopefully some of the voters will take this into account when it comes to the competition!

“Murphy was on the campaign trail for me last year and this year it’s my turn to get him as much support as possible.”

Why should Murphy be crowned Holyrood Dog of the Year 2016? He explains in his own way: “When I was diagnosed with my illness, my parents thought I might not live much longer given the diagnosis.

“They travelled to Stirling on a weekly basis for me and I think that winning Holyrood Dog of the Year 2017 would mean a lot to them and make up for a little of the heartache that my illness may have caused.”

To vote for Murphy and Douglas visit http://www.thekennelclub.org.uk/events/holyrood-dog-of-the-year/douglas-ross-and-murphy/